How wealthy? How pious? 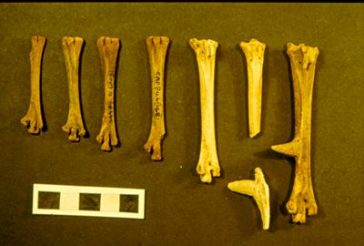 Southampton University undertook a project to analyse food remains unearthed during excavations around the Abbey in the late 1970s and early 1980s, and to compare these with food remains at another abbey at Eynsham.

The aim was to examine how the diet at the abbey reflected changes in the Benedictine rule and in the wealth and status of the Abbey between the Late Saxon and Norman period. St Albans Abbey was refounded as a Benedictine monastery by Paul of Caen, the first Norman abbot.

St Albans Abbey was excavated by Martin Biddle and Birthe Kjølbye-Biddle in two phases: the area of the former Chapter House in 1978 and part of the former Cloister area in the 1980s . The bones from the Chapter House were recorded in 1983; the report written was later revised. The remains are mostly waste from the consumption of meals.

A later grouping of food remains dates from the time of the first Norman abbot, Paul of Caen. He embarked on rebuilding the abbey at the end of the 11th century. The western cloister range of Paul of Caen was demolished by his successor and the south part of the range was filled with what looked like midden material from the time of the building works of Paul of Caen. This deposit contained pottery of late 10th, 11th and early 12th century date as well as shell, metal working residue, fragments of stone and animal bones. During excavation the midden deposit was noted to be densely packed with fish and bird as well as mammal bones.

The earliest explicit attempt by the Roman church to make distinctions in food consumption between Christians and others was by St Benedict of Nursia in the 6th century. He set out regulations for the conduct of the Roman church including many that relate to food. In the 7th century Pope Gregory the Great expressly prohibited the eating of horse flesh because of its association with pagan Saxon religious practices. While pagan Saxon culture celebrated feasting to excess, St Benedict enjoined Christians to ‘abstain from eating the flesh of four-footed animals’, so fish, birds, eggs and dairy foods were permissible as well as vegetable foods, but flesh meat was – in theory – forbidden.

The weak and sick were exempt from the Rule. In the 8th century the Rule of Chrodegang, a reworking of the Rule of St Benedict by the Bishop of Metz, a novice monk, when questioned, says that he eats ‘vegetables and eggs, fish and cheese, butter and beans’ and, because he is still under tutelage, ‘I still eat flesh-meat’. The Rule of Chrodegang is one of the first to set out how food and fasting rules were modified of suit environmental conditions in northern Europe. Over the course of the Middle Ages, these regulations were constantly debated and re-interpreted.

The early Saxon minsters in England were established by the kings and their relatives. They did not necessarily follow St Benedict or any other central authority for guidance on diet, but followed the custom of the individual who founded the house. As abbots and bishops were drawn from ruling families, their food regimes mirrored that of elite secular households of the time. However Anglo-Saxon law codes make it clear that fast days were followed from the 7th century onwards. When King William and the later Norman kings took control of the major institutions in England, they distanced themselves from their predecessors by professing abstemiousness, described as a kind of ‘dietary piety’.

Once reformed as Benedictine abbeys, establishments such as Eynsham and St Albans would have aimed to follow the Rule so far as food was concerned. The church calendar included many feast days. Those held on important days were as important as the fasts that preceded them so there were many occasions when flesh meat might be eaten. Excavated contexts on archaeological excavations only very rarely provide evidence for single occasions, so the food remains tend to amalgamate the evidence for feasts as well as fasts.

We might expect to see greater consumption of flesh meat in the Saxon houses and an increased emphasis on fish and birds as the Norman abbeys as increasingly followed church teachings on diet as on other matters. However, minsters and abbeys were not solely devoted to religious observance; they also had a secular role in their obligation of hospitality to the rich and poor and charity to the latter. For instance, it is on record that both abbeys played host to the king and his entourage in the 12th century.

In St Albans most of the fish consumed were from the sea. Cod was most frequent. Though most would have been preserved, the presence of some head bones show that some were eaten fresh. Flatfish, including turbot, were also eaten in quantity. East coast ports such as Great Yarmouth, where in later centuries St Albans had a fish house, probably supplied the marine fish. While the variety and apparent quantity of the larger fish eaten reflects wealth, it also no doubt reflects the taste of the abbot Paul who, having lived in from Caen, would be accustomed to eating marine fish.

The animal bone remains from 8th and 9th century St Albans suggest that the establishment there was wealthy and substantial, probably more so than Eynsham. It has signs of being wealthier than some other contemporary religious houses, as might be expected if it was founded by the Mercian king. The percentages of pigs and roe deer are uniquely high – even taking into account that the abundance of animals that lived in or fed in woodlands must have been due partly to the large woodland holdings of the abbey and its local manors. The visitors to the site – or perhaps the abbot – engaged in falconry. However, as at Eynsham, the evidence for dietary piety is not strong with only a modest percentage of birds, and no evidence for fish.

In the Norman period the contrast between the two abbeys is much greater. The food remains from Norman St Albans reveal a household that was clearly very wealthy. Exceptional quantities of game, pigs and freshwater fish consumed, and with more than a fifth of all birds eaten being those caught in the wild. The continuity from the 8th–9th to the 11th century at St Albans in the consumption of roe deer and pigs suggests that the wooded character of Hertfordshire continued to influence diet.

Particularly intriguing is the fact that the food regime mirrors contemporary French wealthy households. The large numbers of pig remains and the relatively large quantity of hare can be seen as Abbot Paul stamping his influence on the foods served, following the habits of his young life as a monk at Caen under Lanfranc. He was also meeting his obligation of hospitality to visitors, which, in view of his contacts, are likely to have included the king and the archbishop.

The fish – and the large percentage of birds overall – mark St Albans out as an observant as well as a wealthy household at the time.

But despite the pious intention of St Benedict of Nursia, ecclesiastical establishments in England in the Middle Ages always included flesh meat in the diet. It may have been fed more regularly to visitors and to the the young and the sick than to the religious members of the household and it may have been avoided on fast days but the animal remains from all medieval religious houses show that flesh meat was eaten regularly and apparently not in lesser quantity than in secular households.

Serjeantson, D., Crabtree, P., Mulville, J., Ayres, K., Ingrem, C. & Locker, A. 2018. How wealthy? How pious? The status of Eynsham and St Albans abbeys between the 8th to the 12th centuries re-examined in the light of their food remains. In: Jervis, B. (ed.) The Middle Ages Revisited: Studies in the archaeology and history of Medieval southern England presented to Professor David A Hinton. Oxford: Archaeopress.

How wealthy? How pious? The status of Eynsham and St Albans abbeys between the 8th to the 12th centuries re-examined in the light of their food remains. In: Jervis, B. (ed.) The Middle Ages Revisited: Studies in the archaeology and history of Medieval southern England presented to Professor David A Hinton. (649 KB Adobe Acrobat document, opens in a new window)
Serjeantson, D., Crabtree, P., Mulville, J., Ayres, K., Ingrem, C. & Locker, A.