You are here: HomenextArchaeologynextThe Roman city of VerulamiumnextThe problem with Roman roads

The problem with Roman roads

In scene 10 of ‘Monty Python’s Life of Brian’, the rebels list what the Romans have done for us; roads are third on the list. Roads are one of the aspects of the Roman world that everyone knows about, or do we?

What do we mean by a ‘Roman’ road? For many the term ‘Roman road’ means an engineered road, one which crosses the country in a series of straight-line segments like Watling Street or Ermine Street. There are some famous long-distance roads such as the Appian Way which connected Rome to Brindisi. The surface of the road was paved in some way, and the routeway delimited by a pair of boundary ditches.

In some places, the line of such roads is quite obvious and, on occasion, is still used by a modern road. A good example is the road which connected Verulamium (St Albans) to Camulodunum (Colchester). The country lane between Datchworth and Watton-at-Stone follows the line of this road for most of the way, but deviates to the north just before Watton. Aerial photographs show the boundary ditches crossing the aptly-named Upper and Lower Stony fields. Recent imagery available via Google Earth shows the continuation of this road to the east of Watton (Fig. 1). 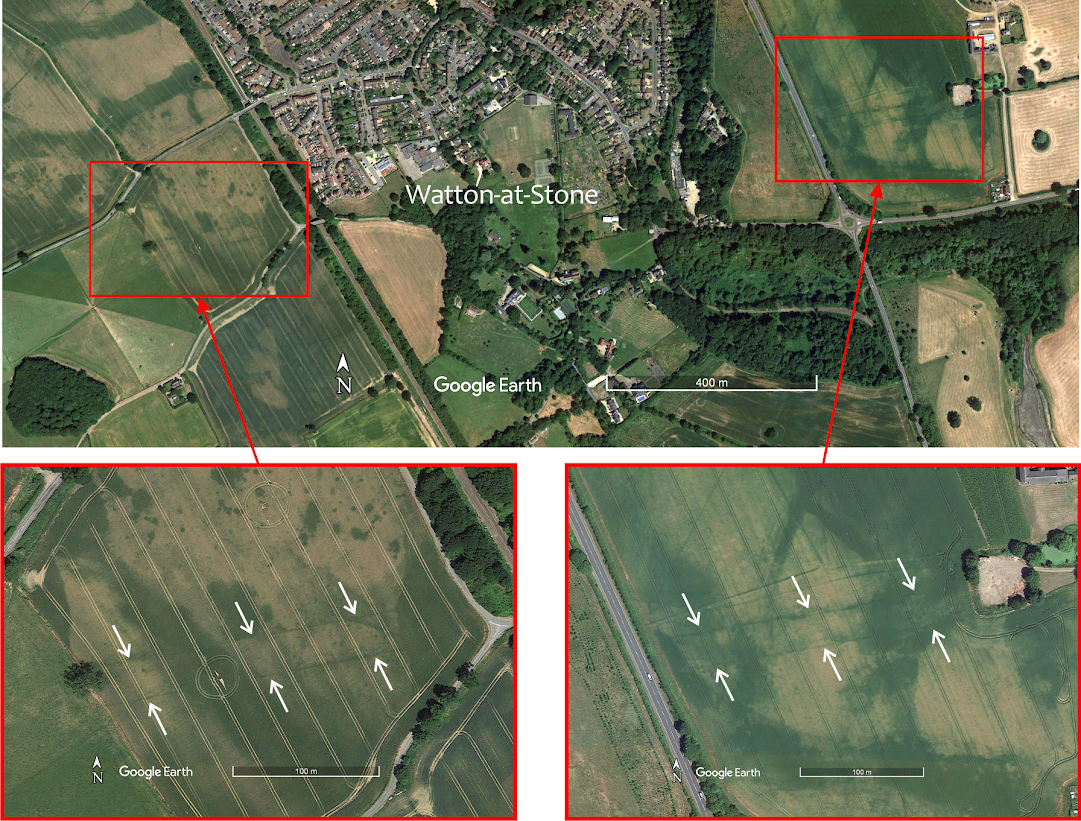 But what about more modest routes? The Romano-British countryside was an occupied, exploited and managed landscape. In most of Hertfordshire, we estimate that there was some form of small farmstead every square kilometre or so. Then there were the larger settlements like Braughing, Baldock and Welwyn, and finally the civitas capital of Verulamium at modern St Albans.

This dense network of settlements must have been connected by an equally dense network of tracks and roads. These tracks would be indistinguishable from their prehistoric forebears and their medieval descendants. Some of our footpaths and bridleways are the modern survivals of these routes. Many of these roads can be quite ephemeral, such as the road found at Turner’s Hall Farm.

The great doyen of Roman road studies in Britain was I. G. Margary who published his survey in 1955[1], a volume that was re-issued many times. Inspired by his work, a group calling themselves ‘The Viatores’ undertook research on roads in the south-east Midlands which included Hertfordshire west of Ermine Street. Two members of the Society were part of this group — C. Morris and R. H. Reid — and the odd notes about their progress are to be found in our early newsletters.[2] Their work was published in 1964.[3]

Unfortunately, many of the roads they proposed are based on very little evidence. Isobel Thompson’s entry on Roman Roads in An Historical Atlas of Hertfordshire [4] compares the road network proposed by the Viatores with the roads for which we actually have some evidence. There is quite a stark difference.

It is not surprising that some 57 years after it was published the research has been somewhat superseded. Such is the nature of academic endeavour. The problem, however, is how that work is used now. Isobel Thompson provides an entertaining example.[5] Most books on the history of Stevenage start with Six Hills barrow cemetery and the Roman road from the south.[6] What, however, is the evidence for the date of the Six Hills? Well, they lie on the line of a Roman road. So, what is the evidence for the Roman road? You may have guessed, it is the line of six burial mounds…

Unfortunately, this entertaining example is just one of many where later researchers have assumed that the Roman roads listed by the Viatores are fact rather than mere possibilities. Ever more complicated interpretations are developed on all sorts of themes from the boundaries described in Anglo-Saxon charters to the meanings of placenames, based on Roman roads for which there is no evidence.

My plea, therefore, is that before you start building theories based on the routes of Roman roads, please check to see if there is any evidence for such a road existing. A good place to start is always the Hertfordshire Historic Environment Record available via the Heritage Gateway.[7]