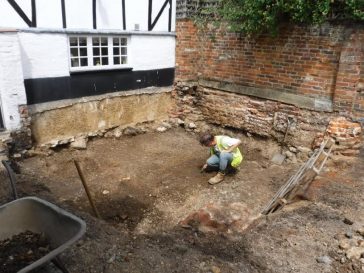 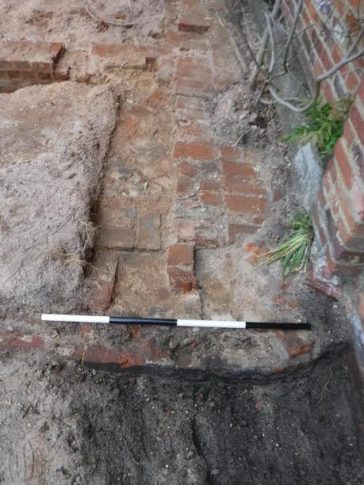 Some 60 years after the site was first investigated by volunteers and staff of Verulamium museum, the Old Bakery site was subject to a ‘strip, map and sample excavation’ in May/June 2019 which was undertaken as part of a planning condition for an extension to the existing residential property.

An area of c.18 sq.m. was mechanically stripped of topsoil and ‘overburden’ under archaeological supervision. The site was defined on its north side by the early 1960s addition to the rear elevation of the Old Bakery, on its east side by a brick boundary wall, on its south side by the wall that once formed part of the old bake-house and on its western side by a machine cut reduced level. The ground level was reduced by approximately 0.8m (to 81.36m AOD).

This took the terrain down to the top of the residual remains of the gravel road leading to the NE gate of Verulamium which separates the 19th and 18th insulae of the Roman town. Apart from three potential cart ruts and later intrusive cuts, no other features were discernible. Ground reduction coincided with the formation level for the foundation of the new extension, which would consist of a concrete raft resting on four drilled piles.

During the ground reduction phase the remains of the Old Bakery were exposed. Apart from fragments of walls and a brick-laid floor there was little that remained of the bread ovens that were demolished in the late 1950s. The bake-house appears to have been divided in two by an E-W wall. The building was probably built in the middle of the 19th century and its outline is recorded on the 1st series Ordnance Survey 25 inch scale map of 1879. According to the historical record, bread was being produced at least from the late 18th century until c.1937.