You are here: HomenextArchaeologynextThe changing face of archaeologynextExcavation at 8-10 High Street, Wheathampstead 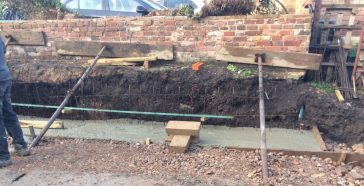 zoom
Fig. 1. Build-up of Victorian garden soil which continued below the foundation for the new retaining wall
(© Simon West, 2019) 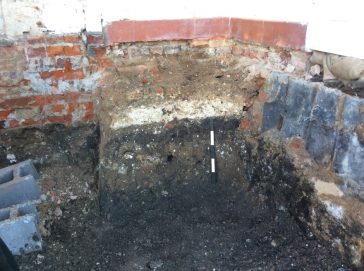 The heart of the Saxon and medieval village

In January and February 2019 building work was monitored at 8–10 High Street, Wheathampstead. This location is in the heart of the Saxon, medieval and later village, close to the river and is a Grade II listed building (List entry Number 1103654: House and shop. C17 exposed timber frame; probably an earlier core to No 10.) Proposed works were for rear extensions, a detached rear workshop, landscaping and associated external alterations.

The work on site cut into the rear slope, much of which had built up probably since the nineteenth century and various late features and levels were observed towards the rear of the site (Fig. 1). The foundation trench for the workshop, also at the rear, produced a large Hertfordshire Greyware base sherd; no features were observed cutting the chalk natural. An area immediately to the rear of the current structure, on the site of an old extension, was also levelled. This proved to be significant, as the modern light build had sealed stratified deposits in one corner (Fig. 2).

Beneath the modern floor, the latest of these appeared to be a rough surface which produced a single sherd of late glazed redware pottery, probably associated with development in the seventeenth century or later. Beneath this surface and its makeup (lime/chalk), were a series of soil deposits down onto a stony layer. At first this was considered to be a cobble surface but this proved to be too rough and intermittent to sustain definitive identification. The overlying soil layers in this small area produced a total of 56 sherds, most were Hertfordshire Greyware (48), but several were of a sandy grog pottery (5), probably of a similar date.

Hertfordshire Greyware dates to the mid-twelfth to mid-fourteenth centuries (1150–1350). This period saw the organisation and development of a new pottery industry which was ubiquitous in this area. It is a hard quartz-based fabric, with some having the addition of flint. The flint fabrics are coarser and considered to be earlier. The ware is largely reduced in the kiln where the oxygen is restricted and varies in colour from grey to black.

Although no kilns have yet been found in the immediate vicinity of St Albans, place-name evidence such as Potters Crouch to the west of Chiswell Green, suggests they were located nearby. What is interesting about this site is the lack of subsequent or earlier pottery. As natural was not reached over most of the area observed, earlier and later could be present in features such as pits which were not uncovered. However, other material such as large fragments of worked clunch were present.

Clunch is a soft limestone (hard chalk) probably from the Totternhoe Quarry near Dunstable, Bedfordshire. When newly quarried it is full of water and easy to cut and carve, hardening as it dehydrates. However, it is vulnerable to weathering. Following the Romanesque period, clunch was a favoured building material and was spread far and wide into lesser buildings after the Reformation, where following the Suppression of the Monasteries, much of the medieval ecclesiastical building material was sold or robbed, to be used elsewhere.

The significance of this site shows that there was considerable activity from the mid-twelfth century onwards, but that the surviving structures are later in date. Whilst the lack of earlier material is not conclusively proved, it would be significant if this was the case. Similarly in St Albans, much of the medieval town cannot be dated before the mid-twelfth century or soon thereafter; there is a rapid expansion from the Saxon core close to the Abbey. Assuming that this activity also involved structures, these seem to have been replaced from c.1450/1550 onwards leaving us with much of the medieval and early modern core as is seen today.