You are here: HomenextArchaeologynextThe changing face of archaeologynextGeophysical surveying in Hertfordshire

Geophysical surveying embraces a number of non-invasive techniques for discovering and mapping underground features, such as buried walls, ditches and artefacts. 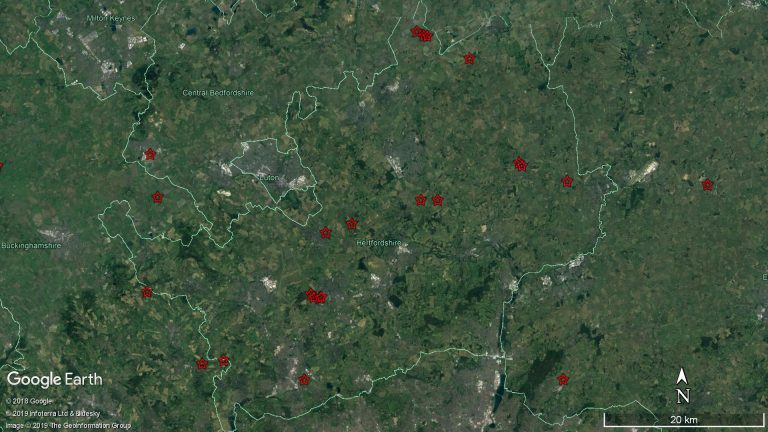 In 2013, a programme of geophysics surveys around the County was commenced, led by Dr Kris Lockyear, a lecturer at the Institute of Archaeology, UCL and Director of the Welwyn Archaeology Society. The equipment used includes a Foerster magnetometry cart, Ground Penetrating Radar and an Earth Resistance meter.

The project was conceived with the intention of using the human resources of local archaeological societies, including SAHAAS. Volunteers were given training on geophysical methods.

Prior to this a start had been made on a comprehensive magnetometry survey of Verulamium. Verulamium is not entirely terra incognita archaeologically, but only a small fraction has been excavated and elsewhere only the basic layout of the city is known from parchmarks.

A blog website has been set up to display the results of the Verulamium survey: hertsgeosurvey.wordpress.com. This also gives details of the different geophysical survey methods used, including earth resistance, magnetometry, and ground penetrating radar.

The resistivity instrument that we use has been developed by members of the Archaeology Group over the past four years for SAHAAS … How does it work? Pretty simple concept: measure the local electrical resistance of the soil and look for high and low values. If there’s a buried wall you would expect high readings because of the stone; if there’s a filled-in ditch, you might expect the reading to be low if the ditch was filled with material that was wetter than the surrounding soil.  [Extract from article by Bill Martin in Newsletter 162, August 2006]

You can find out more about how the equipment is used and what results have been achieved at the Group’s blog. If you would like to join in, please email Ellen Shlasko on hertsgeosurvey@gmail.com.  No experience is needed as training is provided on the job.