You are here: HomenextBuildingsnextBuildings, streets and structures of historic interestnextThe rise and fall of Adelaide Street

The rise and fall of Adelaide Street

This article, based on a lecture given by Wendy Klein to the Society in March 2005, documents the rise and fall of Adelaide Street

Adelaide Street, of which few of the buildings from its past history remain, had a very different character from that of St Peter’s Street and has a known beginning in the 1830s and a known demise in the 1960s, providing a snapshot of a certain period of time in St Albans.

One of the factors relevant to present day St Albans is how 19th century development compares with our all-too-overwhelming development of St Albans today. In the early 19th century, St Albans was still relatively small and might have been trying hard to grow. It would probably have been keen to expand in order to bring the railway and more trade to the town. Very different from our needs now! 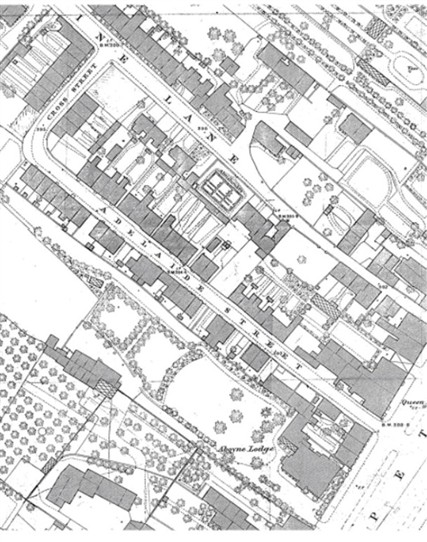 The land that went on to become Adelaide Street, shown in part of St Peter’s Parish Map (1826) (Fig 2, plots 92 & 93) [omitted for copyright reasons], was owned by Sir William Domville who lived at Holywell House, Holywell Hill. He died in 1833 (his memorial tablet is displayed in St Albans Abbey). By 1835, his son, also William Domville, was engaged in a deal with regard to Adelaide Street and its story had commenced. Building houses was becoming a popular speculative venture for the middle and upper classes as the industrial centres grew.

These speculators needed someone to lay out the roads, dig the sewers and parcel out the plots for sale to individual builders. The auctioneers/surveyors Richard Gutteridge and John Page apparently took on this role. They are both listed from 1823 until 1839 in Pigot’s Directory and were the key players in much of the speculation that went on at this time.

One of a bundle of deeds at Herts. Archives & Local Studies (HALS) concerned the transfer of a lease from Felix Mead to Richard Gutteridge on 14th July 1835. It mentions a new Cross Road leading from and out of “New Road” (as it was called then), already made by Gutteridge. This provided access to Catherine Street – and proof of the beginnings of Adelaide Street.

St Albans certainly appeared to be ‘on the up’ at this time. The new Town Hall had been built in 1832. In 1824, the General Gas Company had brought gas to the Borough and in 1833, the water mains had come – it must have seemed like a good time to build. Could it be that Adelaide Street was built to house workers in nearby industries such as the hat factories in St Peter’s Street?

From the 1841 census, in the already well-established Adelaide Street, this would seem unlikely. The street included two bird catchers, agricultural labourers, a carpenter, a sawyer, a gardener, three bricklayers, a shoemaker and a brush maker.

In the Corporation Records of St Albans on January 12th 1838, the Board of Guardians complained about the unhealthy state of the old Christopher Yard (now the site of Christopher Place) through overcrowding – it was suggested this nuisance be removed. Could the speculators foresee a need for new housing for the working class or did the formation of Verulam Road in 1827 precipitate more building in this area?

A photo of the south side of Adelaide St. just before demolition is shown in Fig. 3. The buildings were small brick-built properties with slate roofs. This is one of the earliest examples of this type of terraced housing of cheap construction, fitted with the earliest type of sash windows, multi-paned and close to the outer wall (in better quality housing of a later date, windows would be recessed further inwards). The doors and window arches are all partially supported by a wooden frame underneath. The brick archwork is not very impressive and there is no other form of decoration. 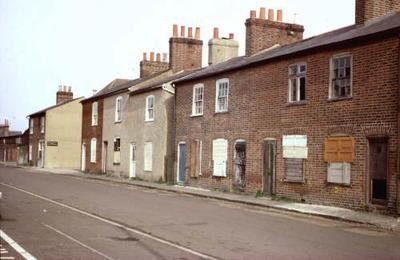 Another bundle of deeds at HALS, entitled the Lambs Close Charity, contains a document giving an insight into the buildings existing at this time – a sale notice for the area (Fig.4) [omitted for copyright reasons]. On 24th November 1848, the sale of the freehold and leasehold of a number of estates took place at the Woolpack Inn in St Albans. This included the estate of Adelaide Street and makes up lots 6 to 11. The paperwork relating to this sale provides information about the buildings, their ownership and their rent. 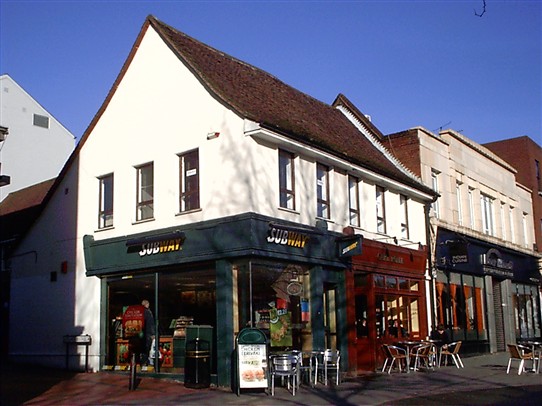 The sale details mention other buildings relating to the pub such as a cottage, chaise house, stable and skittle ground. It was obviously very much the cornerstone of the street and, interestingly, the sale documents also tell us that the occupier, Mr Richard Saunders, under-tenant to James Curtis, a brewer in Harpenden, has held a lease since Lady Day 1842. Before this, it was listed in an 1838 Directory under the tenancy of James Vass. Previous to this, it is not listed as a public house. Could it have been opened as a pub just to serve the newly thriving street? The buildings behind, now the Adelaide night club and a restaurant, would seem to be the large workshop with coach houses under, mentioned in lot 11 in 1848. This building went on to serve a use as a warehouse for various future businesses.

A view of part of Adelaide Street is revealed in Fig. 6, which shows an old cottage with barn attached. The artist was E. A. Phipson, who painted many views of St Albans in the early 1900s. This painting is dated 1901. 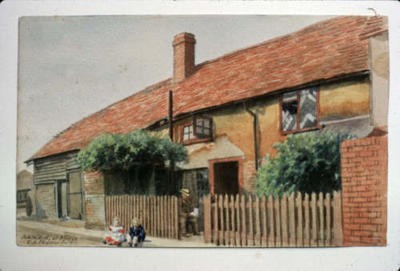 It would seem highly probable that the building was the cottage attached to the pub but, again, this requires further research. However, a map of Adelaide Street dated 1911 shows quite clearly two cottages marked to be pulled down behind the pub – could these be the ones?

As stated earlier, the 1841 census shows us tradesmen such as bird catchers, carpenters, labourers and a brush maker. By the 1851 census, the occupations are more varied, including those of slightly higher status, such as schoolmaster, greengrocer and brewer. There are also tinplate workers, cordwainers, a dressmaker and a painter and glazier. The list also seems to reflect a growing more sophisticated town with a need for these skills. Also interesting is the fact that it now included 20% involved in the hat industry – there being two straw traders in St Peter’s Street.

The 1880’s to the 1900’s probably saw Adelaide Street at the height of its existence, clearly reflecting the growing prosperity of St Albans with its railway and growing number of industries.

On the opposite corner to the Queen Adelaide, taking up a large frontage in St Peter’s Street and going back into the south side of Adelaide Street, was the cabinetmaker, upholsterer, furnisher and shopkeeper, Edwin J. G. Bryant. He came from Ilfracombe to Adelaide Street in the late 1890’s with his wife, Emily, and children,. In the book, St Albans in Old Photographs, we see one of his advertising notices pasted up on the walls of Harvey’s Cash Stores in George Street in 1902.

His business was to remain in St Peter’s Street and Adelaide Street until well into the 20th century and he was very quick to expand the existing premises with additions in 1905 and 1912. His storerooms were housed in the existing building (now the Adelaide night club) across the road from his shop.

Also, on the south side, at number 3, from the early 1880’s, was the general carman, contractor, and coal dealer, Henry Hathaway, from Sandridge. He lived there with his wife, Julia and nine children. A Miss A. Hathaway was still there in 1952. Benjamin Knight, a chimney sweep, lived from 1882, at 28-30 Adelaide Street and by 1911 was listed in the Inland Revenue Survey as a landlord as well, owning numbers 33,35,37 and 40. Mr Jesse Hicks came from Northleigh, Oxfordshire in the early 1900’s and ran an alehouse called the ‘Ten Bells’ at number 48, with his wife, Hannah. She still lived there in 1952, aged 80 and is listed as a beer retailer.

The Demise of the Street

In 1926, the cattle market moved from St Peters Street, in front of the Town Hall, to what is now the site of the Drovers Way Car Park. It appears that the growth of St Peter’s Street as a thriving high street with chain stores probably meant that it was more appropriate for the cattle market to be sited elsewhere.

The period just after the Second World War saw the building of Aboyne Lodge School within the old grounds of Aboyne Lodge behind the south side of Adelaide Street.  By 1954, the listings in Kelly’s Directories tell their story, much of the south side of Adelaide Street had been demolished. In 1962, the Queen Adelaide closed its doors. Between 1967 and 1968 most of the buildings had been pulled down, making way for access to the new multi-storey car park via Drovers Way, which cuts right through Adelaide Street (Figure 7). 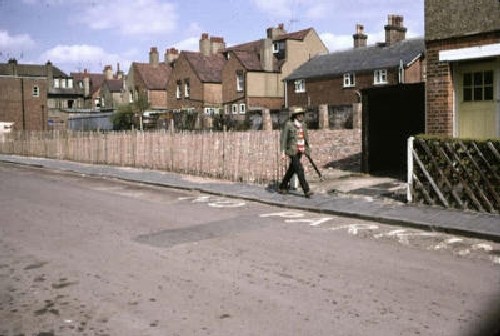 Figure 7: South side of Adelaide Street, cleared by demolition.

A very sad end for what was once a thriving street.