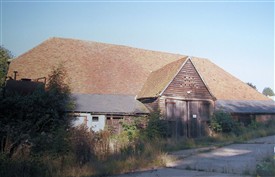 Although Kingsbury Barn is the oldest building standing in the commercial complex of Kingsbury Manor and Kingsbury Mill, it was not mentioned by Pevsner in his description of the site, nor by subsequent revisors.

Kingsbury Barn was dendrodated to 1373/4 by English Heritage, and Adrian Gibson wrote a short report on the building for The Society of St Michaels and Kingsbury.

The barn is one of a group built by St Albans Abbey during a period when John Moote was initially Cellarer and subsequently Abbot. It has been suggested that the Abbey was facing a shortage of labour to work its farms after The Black Death, and set about a programme of upgrading the farm buildings to attract tenants. This series of barns share construction details and are built between 1370 and 1395.