Isabella Worley, the wealthy widowed daughter of slave trader Joseph Timperon (1), paid for a new drinking fountain in 1872, which was designed by Sir George Gilbert Scott and his firm (2).  The monochrome postcard, dated 1914, shows the view looking down High Street towards the Peahen junction with Market Cross fountain in the foreground and pedestrians in the street. 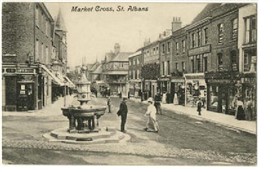 Located west of the Clock Tower and overlapping George Street, the fountain remained there until the 1920s, by which time road traffic had grown to the point that the fountain posed an obstacle (3). It was dismantled but the component parts were rescued:

As workman were dismantling the fountain, it was rescued from demolition by Alfred Barnes who took the top part to his garden in London Road and the bowl to the garden of a house he owned in St Peter’s Street next to the Post Office. Lord Brocket later bought the property and moved the Waterend Barn here. The Thrale family opened the Waterend Barn as a restaurant and displayed the fountain as an attractive feature. The Council had tried to reunite the different parts of the fountain in 1956. When Lord Verulam was Mayor, he suggested it to Bill Murgatroyd, the Town Clerk, and Albert Moody, the City Engineer, but they could not get the owner of the house in London Road to part with the top section. Eventually it again proved to be an obstruction and the Thrale family offered it back to the Council in 1964. The bowl was set up again in the [City Council Highways Department] depot at the prison in Victoria Street, opposite the station. (4) 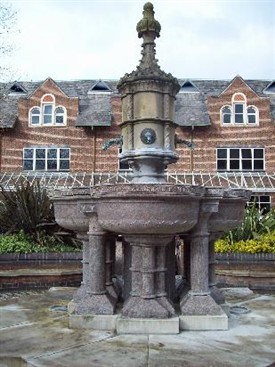 While the prison has been redeveloped for housing, the fountain remains on public display.

Peter Bourton, with thanks to Judy Faraday