You are here: HomenextBuildingsnextBuildings and structures of historic interestnextThe Eleanor Cross of St Albans

The Eleanor Cross of St Albans

The marriage of Eleanor and ‘Longshanks’

Many medieval royal marriages were more about diplomacy than an expression of love, and the marriage between Eleanor of Castille and Prince Edward (later King Edward I) started the same way. Edward’s imposing height resulted in the nickname ‘Longshanks’, while his military campaigns in Scotland led to the epithet of ‘Hammer of the Scots‘.

Following negotiations between Eleanor’s half brother, Alfonso X, King of Castille, Léon and Galicia, and Henry III (Edward’s father), a marriage between Edward and Eleanor was arranged, in return for which Alfonso agreed to transfer his claims to Gascony to Edward. Despite the transactional nature of the marriage, it became a love match, and the pair spent rather more time together than was usual for most royal couples.

The royal couple quite often passed through St Albans on their way to Eleanor’s palace at Kings Langley [1] [2]. On one such occasion in August 1274, the citizens of St Albans petitioned Eleanor to require the Abbot to produce the charters obliging the townspeople to have their corn ground in the (expensive) Abbey Mill [3]. It seems unlikely that Eleanor intervened; it was still a source of grievance when the the townspeople laid siege to the Abbey in 1327 [4].

In September 1290, while staying in Northamptonshire, where her husband had convened a meeting of Parliament in Clipstone, Eleanor was struck down with illness. She was joined by her husband, but just over a week later, she died aged 49 on 28 September 1290, after 35 years of marriage to Edward. Edward was stricken with grief [5].

Eleanor’s body was transported initially to Lincoln Cathedral, where her internal organs were buried, and then from Lincoln to Westminster. The funeral procession stopped overnight at Grantham, followed by Stamford, Geddington, Hardingstone, Stony Stratford, Woburn, Dunstable, and St Albans on 12 December 1290. Lane records that:

On Tuesday, December 12th, the procession was met at St. Michael’s, the entrance of the town, by the monks of the Abbey, clad in their copes, with their Abbot, John of Berkhamstead, only elected the Saturday before. The Queen’s body was placed in the Abbey before the high altar, and the monks celebrated “divine offices and holy vigils ” through the night. [6]

The following day, the procession set out for Waltham (later Waltham Cross), then Westcheap (later Cheapside) and finally Charing (later Charing Cross). However, Edward proceeded directly to London, doubtless to superintend the arrangements there, including Eleanor’s eventual interment in Westminster Abbey on 17 December 1290.

Edward ordered that crosses be erected wherever Eleanor’s funeral procession had stopped overnight. Most have now disappeared, but they are believed to have followed a basic design devised by Edward’s Master Mason – a plinth of several steps, topped by three tiers – the first displaying the arms of Eleanor, the second comprising her statue, and the third a column surmounted by a wooden cross [7].

A cross was erected in the market place at St Albans (then much larger), in the area now known as Market Cross. According to Chris Saunders, it ‘was completed in 1294 at a cost of £100, well over the estimated cost of £90. The master mason was John Battle who was also responsible for the crosses at Northampton, Stony Stratford, Woburn and Dunstable’. [8] 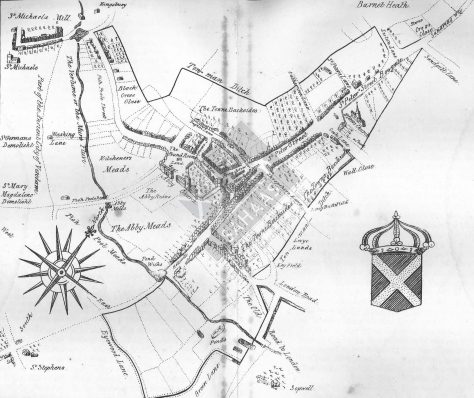 There is no known picture of the cross, though tiny representations appear on Agutter’s later copy of Benjamin Hare’s 1634 Map of St Albans and on a map by John Oliver from about 1680 (Figure 1) [8].

The best remaining example of an Eleanor Cross is at Geddington in Northamptonshire. At nearby Waltham Cross, you can see an example that has been heavily restored, but which gives a good idea of how many of the crosses would have appeared (Figure 2) [9]. 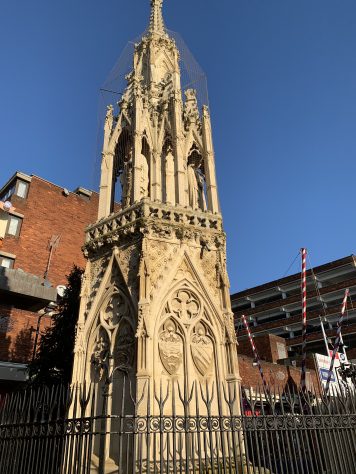 The location of St Alban’s Eleanor Cross made it a focal point of the town. Chris Saunders notes that ‘it was here that the insurgents in 1381 burnt muniments taken from the Abbey and later read out their short lived charter of freedom. It was here also that the “heretical” books of the Lollard Walter Redhed of Barnet were burnt after he recanted in 1426/7’. [10] It is reported that, in 1643, the High Sheriff of Hertfordshire read a Royal Proclamation from the steps of the Eleanor Cross, advocating the raising of Trained Bands [11]. He was arrested by one Captain Oliver Cromwell for his pains.

Wear and tear may have taken their toll on the Eleanor Cross in St Albans, particularly given the amount of cart and barrow traffic that would have passed nearby. But it seems entirely plausible that the main damage to the cross in St Albans resulted from deliberate vandalism by Parliamentary troops garrisoning the town in the early 1640s.

One strand of iconoclasm at the time was a dislike of crosses and funerary monuments, including some of the Eleanor Crosses. The Cheapside Cross was the focus of much controversy before it was torn down in 1643 [12], following legislation requiring the removal of idolatrous images within London. A few years later Charing Cross was also demolished. Although this legislation did not extend beyond the capital, it is indicative of the attitudes of militant iconoclasts.

At any rate, the remaining stump of St Albans’ Eleanor Cross was ordered to be demolished by the town authorities in 1701 [13], and was replaced by the so-called Market Cross, which appears from contemporary images to have been a canopied water pump. This was in turn demolished in 1810 and replaced some years later by the Town Drinking Fountain.

[8 ]A copy of the Agutter Map is held in the SAHAAS Library. The map is dated after the remains of the cross were removed by the Borough authorities in around 1700, so it is possible that the image shown of the cross was taken from an earlier map.