You are here: HomenextBuildingsnextPubs and coaching innsnextGambling on the Turf Hotel

Gambling on the Turf Hotel 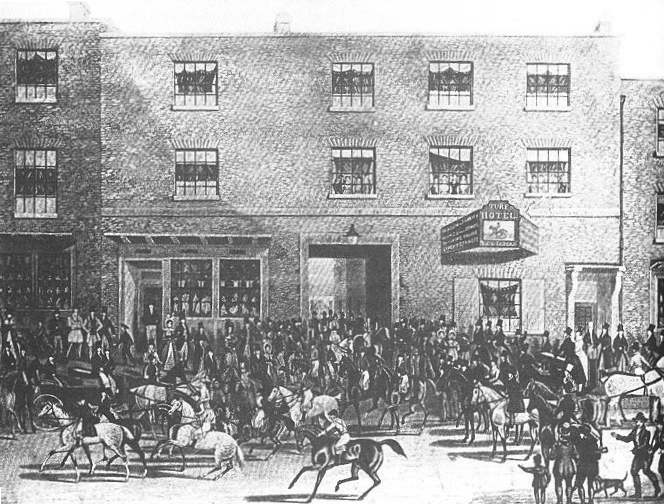 By his own account, Thomas Coleman was a successful hotelier and sporting impresario. But was there less to him than met the eye?

Thomas Coleman is one of the most interesting characters in the nineteenth century history of St Albans. It was he who initiated the running of the first steeplechase in England turning the 1830s town into a hotbed for horse racing and gambling.

Coleman’s base was the Turf Hotel in Chequer Street which he paid to rebuild in modern fashion (Baily’s Magazine, 1 June 1876). That was his claim anyway, and such is the general interest in Coleman, one that is now regularly repeated on the Internet. However, the story has always troubled me as his leasehold tenure and shaky credit history suggest someone else paid the bill.

A ‘to let’ advert in The Times newspaper (4 September 1826, p. 1) confirms that Coleman was indeed telling a tall tale. The advert records that the inn ‘has been rebuilt’ and that interested parties should apply to Mr Jeffries, the current tenant. As the date of publication was fifteen months before Coleman took the lease, he cannot have been responsible for rebuilding the inn (HALS SBR/354). Instead the Kinder family, owners of the local brewery and the inn’s freehold, are the likely suspects.

Why does this matter? While it is always best to have our facts straight, there are two key points to consider. Firstly, in repeating his claim about paying for the building, writers over-extend Coleman’s story from sporting entrepreneurialism into property development.

A prosperous era for the inn trade in St Albans

Secondly, we lose sight of what really happened. After decades of decline, 1826 was an important year for the local inn trade. Not only was the Chequer redeveloped but two new inns were built from scratch.

One was the plush Verulam Arms (now the Verulam House Nursing Home) whose cost was underwritten by Lord Verulam. The second was another Kinder venture. This was the (now-demolished) Cross Keys on the corner of Chequer Street and London Road. These three were the first purpose-built establishments in the modern history of the town, a sign of confidence in a trade boosted by the opening that same year of the Verulam Road bypass.

Coleman had no hand in these developments. For those who did – the Kinder family and Lord Verulam – their investment plans soon went awry. Just twelve years later, in 1838, the opening of the London to Birmingham railway brought the inn trade to its knees. Ironically, Coleman must have been relieved not to have had any capital tied up in the Turf’s bricks and mortar.