You are here: HomenextBuildingsnextPubs and coaching innsnextThe Decline of the White Hart

The Decline of the White Hart 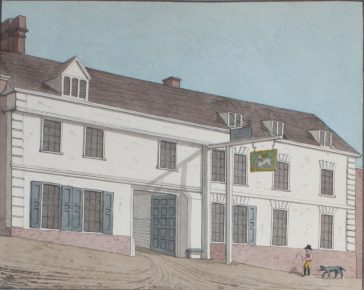 From inn to lodging house and back again

In the late 1600s the business of servicing travellers using the roads through St Albans was the cornerstone of the town’s economy. (Ref 1) Several large inns were at the heart of this. However by the end of the century slow decline set in, something that continued through the 1700s and well into the 1800s as improvements in the maintenance of the roads and technical innovations to coaches and wagons meant that other towns, such as Dunstable, were better positioned to meet the needs of wealthy travellers seeking overnight accommodation.

The White Hart on Holywell Hill

The history of the White Hart on Holywell Hill is emblematic of this decline. In the 1750s it still had local prestige when its innkeeper, Edward Langford, running the largest inn in the town with beds for 26 guests and stabling for 50 horses, was appointed mayor of the borough of St Albans. (Ref 2) However, by 1792, the diarist John Byng recorded a business in trouble noting that while the White Hart was “perhaps the best inn” in St Albans it was also “unequalled in filth, inattention and charge”. (Ref 3)

Its fortunes continued to worsen. In the mid-1790s, in spite of the then innkeeper’s protests, the St Albans Turnpike Trust built a new road through the town to avoid the steep incline of Holywell Hill leaving the White Hart in a meander isolated from its main source of trade. (Ref 4)

Bypassed by Verulam Road, undermined by the Verulam Arms

While there is some evidence that the business improved in the early 1800s, it was further hobbled in April 1826 by the opening both of another by-pass, now the Verulam Road, together with what we would describe today as a 5-star hotel (see Fig. 2). This was the Verulam Arms and its up-to-date standard, to the frustration of the innkeeper of the White Hart, Isaac Newton Hayward, attracted most of the wealthy clientele who had previously frequented his inn. Within five months Hayward complained that he was suffering “…a very great decrease of business having lost many noblemen and gentlemen’s families” to the Verulam Arms. (Ref 5) So precipitous had been the decline that

…having been placed here by the assistance of friends and having nothing to depend on but the business for our support, should business continue to fail (as of late) we shall be unable to withstand these difficulties which are likely to await us and shall be compelled to quit the house which has been the support of our family upwards of fifty years. (sic) (Ref 6)

Hayward finally sold up in 1835 leaving the White Hart with stabling for just ten horses, clear evidence of the longer term decline over the previous 80 years. (Ref 7) However, it did not reach the nadir in its fortunes until 1840 when the inn was shut for around eighteen months. (Ref 8)

The same fate befell several of the town’s other alehouses as well but none had the pedigree of the White Hart. They were all victims of a storm of problems caused, amongst other things, by the opening of the London to Birmingham railway in 1838 as well as competition from the growing number of alehouses and beerhouses in the town.

The inn was open again by 1843 and remained so, seeing off its upstart rival, the Verulam Arms, which closed in 1849. However, it traded in much diminished circumstances, effectively a lodging house. The 1871 census records five labourers, two shoemakers, two travellers and two straw sewers living there, a far cry from the clientele the inn still attracted in Hayward’s time just 50 years previously. (Ref 9) That the White Hart is trading today is due largely to investment from the 1900s onwards.

2. The National Archives, WO 30/49, Inns and Ale-houses: Return of Accommodation for Men and Horses

9. My thanks to Chris Saunders for pointing this out.