You are here: HomenextBuildingsnextStreets, lanes and highwaysnextTackling obstructions in the High Street and George Street

Tackling obstructions in the High Street and George Street

During the eighteenth and nineteenth centuries, active steps were taken to tackle the obstacles to free-flowing traffic into and through St Albans

The busy route from London to the north-west

By the early nineteenth century, George Street, then managed by the St Albans Turnpike Trust, together with the High Street and Fishpool Street, were parts of the main route through St Albans between London and the north-west of England. [1] Keeping the road in repair was a constant test for the trustees as it was busy: in the year from June 1808 alone, over 45,000 carts and carriages and 260,000 market-bound animals were recorded at the local tollgates. [2]

Another challenge for the trustees was to meet coach travellers’ expectations of faster speeds and improved safety over terrain that was, to say the least, difficult. Recent advances had been made, the most significant being the ‘new’ London Road opened in 1796. This wide, gently rising road eliminated the constricted route along Sopwell Lane and the steep ascent of Holywell Hill. Now traffic from London whizzed up to the Peahen crossroads. It was a laudable achievement. But it left those deserving plaudits, the local men of the St Albans Turnpike Trust, in a pickle.

Reaching the crossroads with Holywell Hill, the coaches often slowed to a crawl, as they competed with the rising tide of vehicles and animals coming up the road towards them. It is clear from their minute books that the trustees had foreseen this problem when they started to plan the London Road development in the early 1790s. But lack of funds thwarted plans for a by-pass, so the trustees focused instead on remedial work to remove obstacles to traffic flowing through the High Street and beyond.

Directly opposite the London Road lay the High Street. Originally one of the foremost inns in the town, the large Red Lion, had a long frontage running west along the High Street from Market Cross, down to where the building now known as the ‘Thai Square’ stands (Verulam Road didn’t exist at this time).

Following a marked downturn in the local inn trade, the building had been purchased in 1758 for his own residential use by surgeon Joseph Handley, a prominent and cussed local politician. [3] From what we know of his personality, the building’s prime location clearly attracted him.

On the strength of the Andrews and Wren’s 1766 map of the town (Figure 1), we estimate that the width of the High Street outside the Red Lion was just 24ft wall to wall – wide enough to allow two allow two coaches to pass at the same time but little more. Handley’s house loomed over the corner of the High Street and Market Cross, which may be why it became known colloquially by contemporaries as ‘Handley’s Corner’. [4] 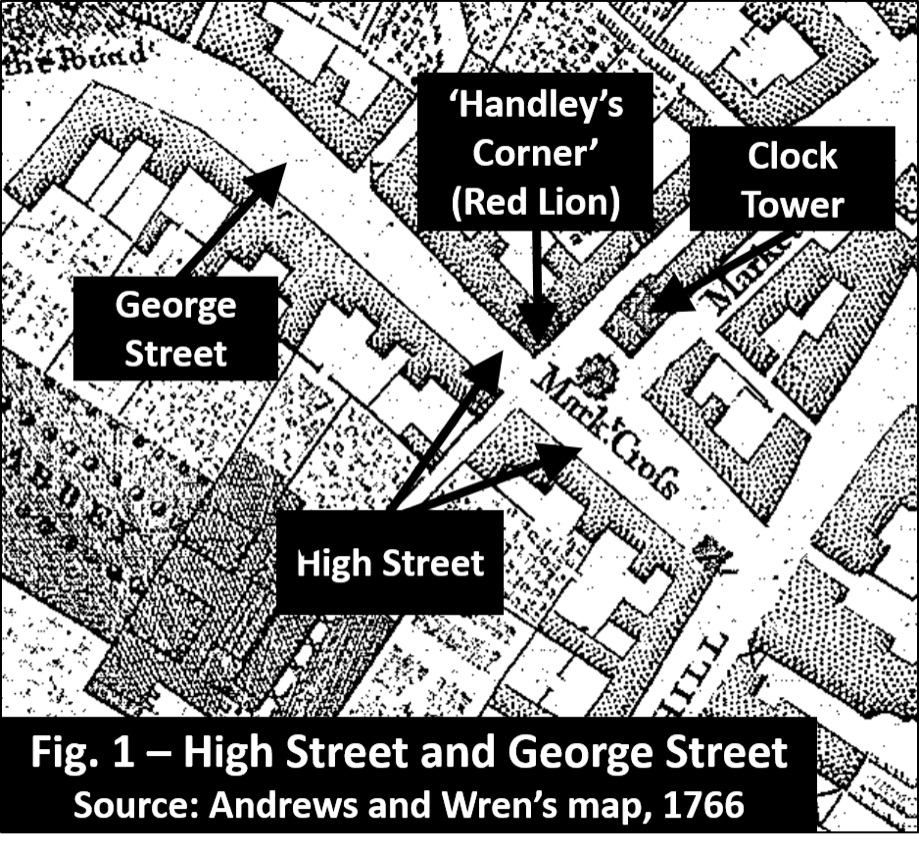 Following Handley’s death in 1782, his house was converted back into an inn, trading again as the Red Lion. [5]  In 1791, to help solve the growing bottleneck conundrum, the turnpike trustees purchased the building and its yard and had a good part of it demolished to widen the road.[6] The width of the road at the corner (between ‘C’ and ‘D’ on Fig. 2) is now an acceptable 37ft. All this work, completed in 1792, materially changed the layout of High Street to one more familiar to us today. 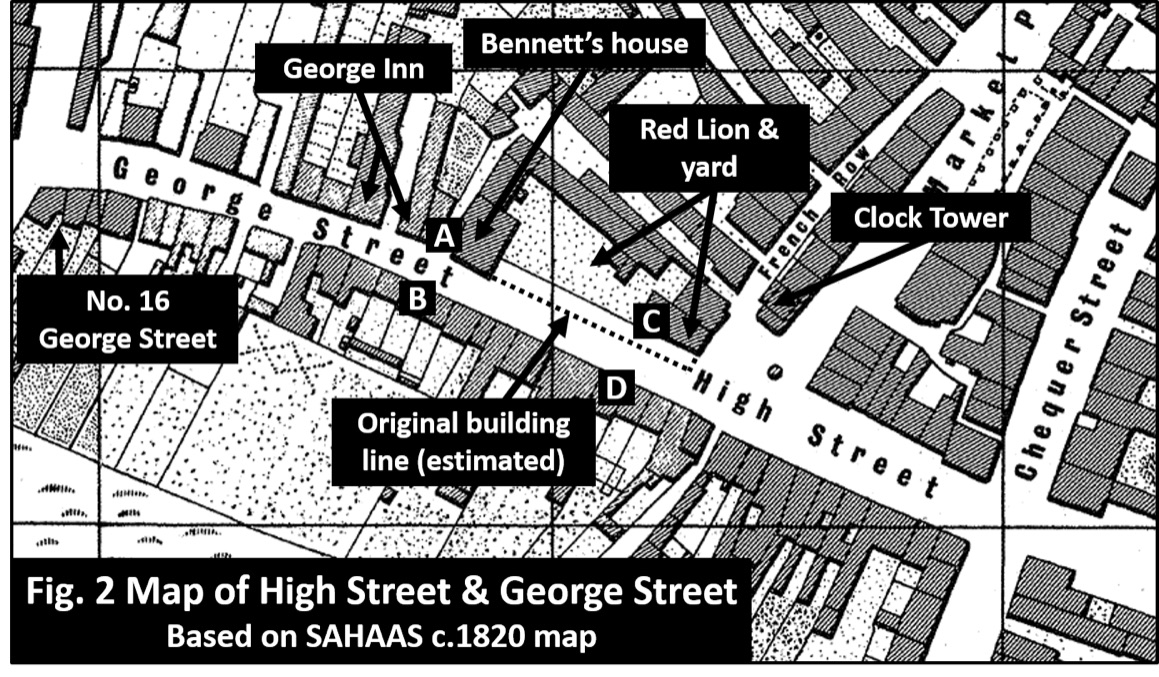 The trustees could claim another minor success. The kitchen window of the George Inn jutted into George Street, though by how much was not recorded. [7] Assuming it was canted, it perhaps had a projection of 2ft, maybe more.

According to our survey, the road at this point is, and was then, around 24ft wide measured from wall to wall. This was the narrowest part of the street making the window, even with that small projection, a significant impediment. In particular pedestrians would have to dodge it by walking in the increasingly busy and dangerous carriageway. [8]

In return for replacing the protruding window Thomas Clarke, the innkeeper, asked the trustees to pay for the cost of bricking the front of the inn. Agreement was eventually reached for the ground floor only and the resulting brickwork is visible in a drawing by George Oldfield dating to around 1800 (the original is available in HALS).

As other Oldfield drawings demonstrate, several inns had previously been refaced in brick to attract custom with at least an outward aspect of modernity. There are still timber-framed buildings in the medieval core of St Albans lurking behind often impressive brick frontages, like the George.

So, by the time the New London Road opened in 1796, the trustees had managed to clear two of the bottlenecks in High Street and George Street, one major and the other minor.

But there were still problems, especially as George Street remained steep and constricted. Detailed notes in the trust’s minute book (HALS TP5/3) together with results from our site survey conducted in 2017 allow us to map their extent with reasonable certainty on Figure 3. [9]

One bottleneck was the off-set crossroads at the junction with Spicer Street, Romeland and Romeland Hill. Because nos. 14-16 George Street were largely aligned with the general building line on the south side of the street, the approach coming down the hill was much straighter than it is today (labelled ‘Pre-1814 building line’ on Figure 3).

The resulting distance between no. 16 and the house at the top of Romeland Hill (‘RH’) was about 30ft, 22ft with pavements. This gap was wide enough for two carriages to carefully pass each other as they pivoted around no. 16. However, bad weather, speeding coaches and slow but skittish animals made it a hazardous manoeuvre. This was described by Solomon Shaw in his book, History of Verulam and St Alban’s published in 1815, as having ‘a most dangerous turning’. [10]

The trustees did their best to tackle problems such as these but struggled in the face of opposition from the owners of buildings in the road. For example, James Bennett, then the owner of what is now the ‘Thai Square’ restaurant in George Street refused a deal to alter the front of his building. [11] Similarly, the owners of no. 16 George Street (B in Figure 3) held out for a further 28 years before they too sold their property to the trustees.

Finally, in 1813, the turnpike trustees bought the freehold for no. 16 intending to demolish the house. It was rebuilt with a frontage set back from the original building line, and curved at the corner. Agreement was also reached with the owners of nos. 14 & 15 (C & D in Figure 3) to knock down the front few feet of their buildings. [12] Figure 4 shows the results of the work completed in 1814. Numbers 14-16 were now on a different alignment to the rest of the south side of the street establishing the pronounced curve we see today. 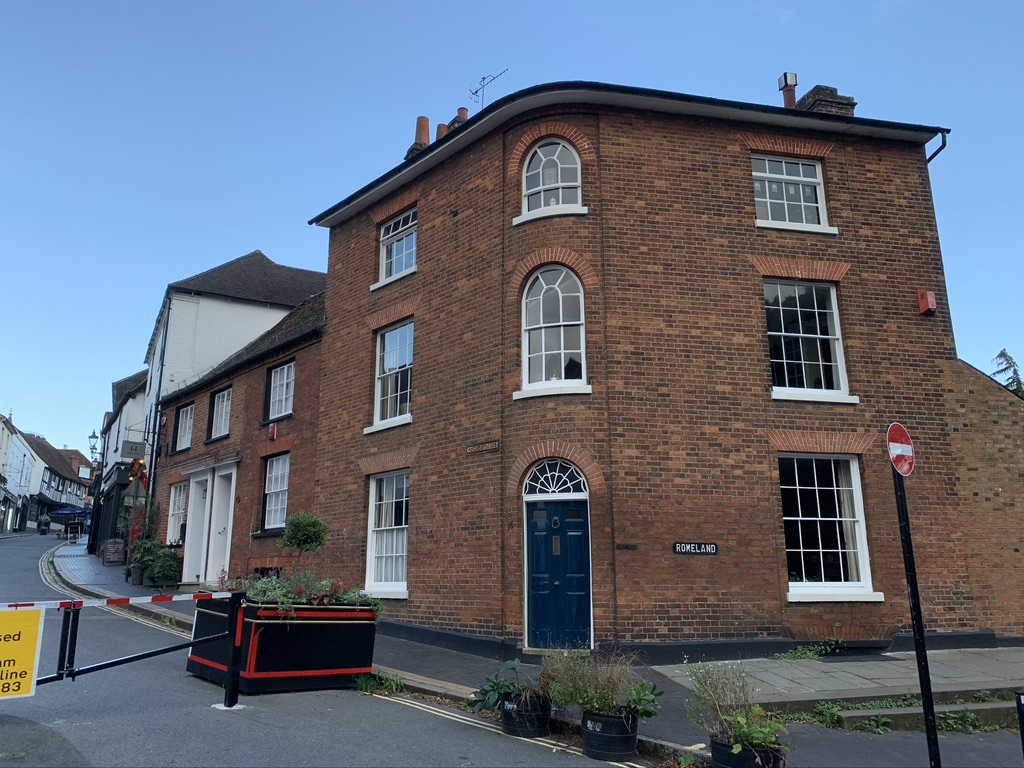 The gap between no. 16 and the top of Romeland Hill now extended to 38ft or 30ft with pavements, figures more typical of modern turnpike roads. [13] Commenting in 1815, Shaw thought the work not only ‘rendered [the road] much safer … but added materially to the respectable appearance of the town in this part’. [14]

Despite these changes, the route from Fishpool Street to High Street remained steep and typically narrow. Coach travellers had to wait for the opening of Verulam Road in 1826 to experience the same speed and comfort that London Road had established 30 years before.

This article is an edited version of three articles previously published in Newsletters 205, 206 and 207. Our thanks to Kate Morris and Alan Smith for their comments on an earlier draft of the article in Newsletter 206, and to Gillian and Graham Field for showing us round no. 16 George Street.

[2] These figures are quoted in the Appendix to the Fifth Report from the Select Committee on the Roads from Holyhead to London, 1817, p. 100.

[6] HALS, TP5/2, St Albans Turnpike Trust Minute Book, 27 September 1791. The trustees then sold what remained standing to the Searancke brewing family who had it rebuilt. Actually, the use of the word ‘rebuilt’ here is contentious. There is an argument to be made that the remaining building was just refaced in brick. FG Kitton, in his article ‘The Old Inns of St Albans’, SAHAAS Transactions (1899-1900), p.254, certainly thought so. Judging from analysis of the Trust’s minute books and Abbey parish poor rate assessments this is unlikely with the evidence more indicative of a complete redevelopment. It is this mid-Hanoverian building which is visible in contemporary sketches of the area around the Clock Tower dating to the early 1800s and in a photograph from about 1892. See Sutherland’s aquatint of the Market Cross area dating to c.1812 in the St Albans Museums’ collection; for the photograph see Yesterday’s town: St. Albans: two centuries of town and city, B. Carrington, & R. Richardson (1986), p. 23.

[8] The Oldfield sketch (HALS, DE/Of/8/469) does not show a pavement. However, this is most likely a deliberate omission by the artist as other images show pavements in the centre of the town at this time. Whether there was a pavement or not doesn’t detract from the central point that pedestrians were often forced to walk at least 3-4ft away from the building line to circumvent the window.

[11] HALS, TP5/2, St Albans Turnpike Trust Minute Book, 20 February 1792. The suggested location for Bennett’s property is based on analysis of contemporary poor rate assessments and Land Tax schedules. The minutes are not clear as to what work was intended but it is probable that it related to the front of his building. Bennett’s refusal has ensured this important building, an example of a Tudor inn, albeit substantially changed internally, has otherwise remained intact.