You are here: HomenextBuildingsnextStreets, lanes and highwaysnextThe origins of Everlasting Lane

The origins of Everlasting Lane

Today Everlasting Lane is a public right of way, unmetalled for most of its route between its junction with Oysterfields in the south and Batchwood Drive in the north. (Fig. 1) Its present name seems to be a recent coinage, perhaps a comment on its ability to survive twentieth century housing developments that have threatened to obliterate it. It is obviously a very old lane – a tree-lined and sunken trackway and, for one section, what might more accurately be described as a terraceway where it follows the side of a valley. 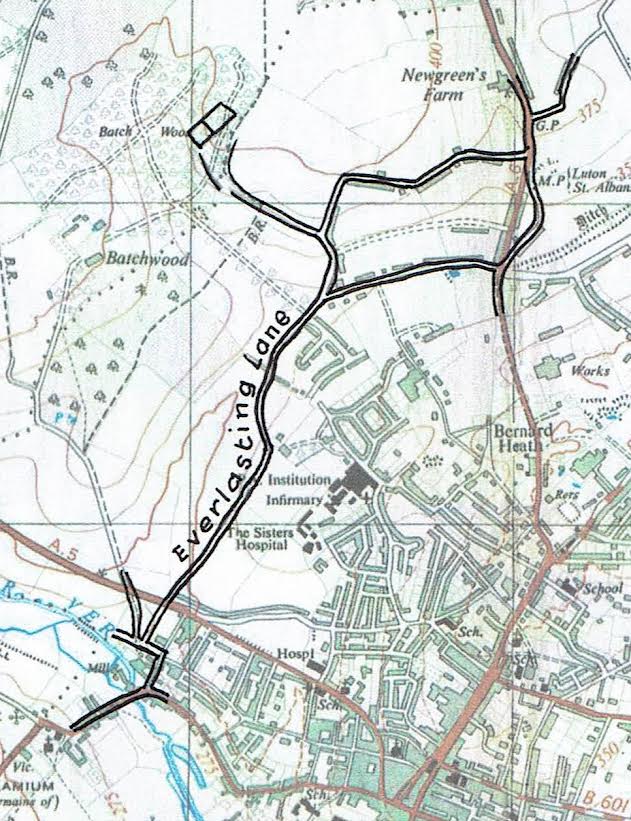 A study of early maps, documents and the landscape itself shows clearly that Everlasting Lane was at least twice as long as it is now, beginning possibly at St Michael’s church or, more certainly, at Kingsbury manor and continuing to the north to Batch Wood on the edge of the Childwickbury estate. Roads tend to be named after their destinations; so it is significant that an earlier name for Everlasting Lane was Kingsbury Lane and, in the medieval period, St John’s Lane, probably from St John’s Cross that is believed to have stood at its junction with the present Fishpool Street.(Ref. 1) (2)

The precise course of the old lane to the north is uncertain as it appears to have had two branches, but the original destination, as I have suggested, was probably Batch Wood, a moated manorial site (Hertfordshire HER No. 6534) a walkover survey of which revealed twelfth to fourteenth century pottery.(3) 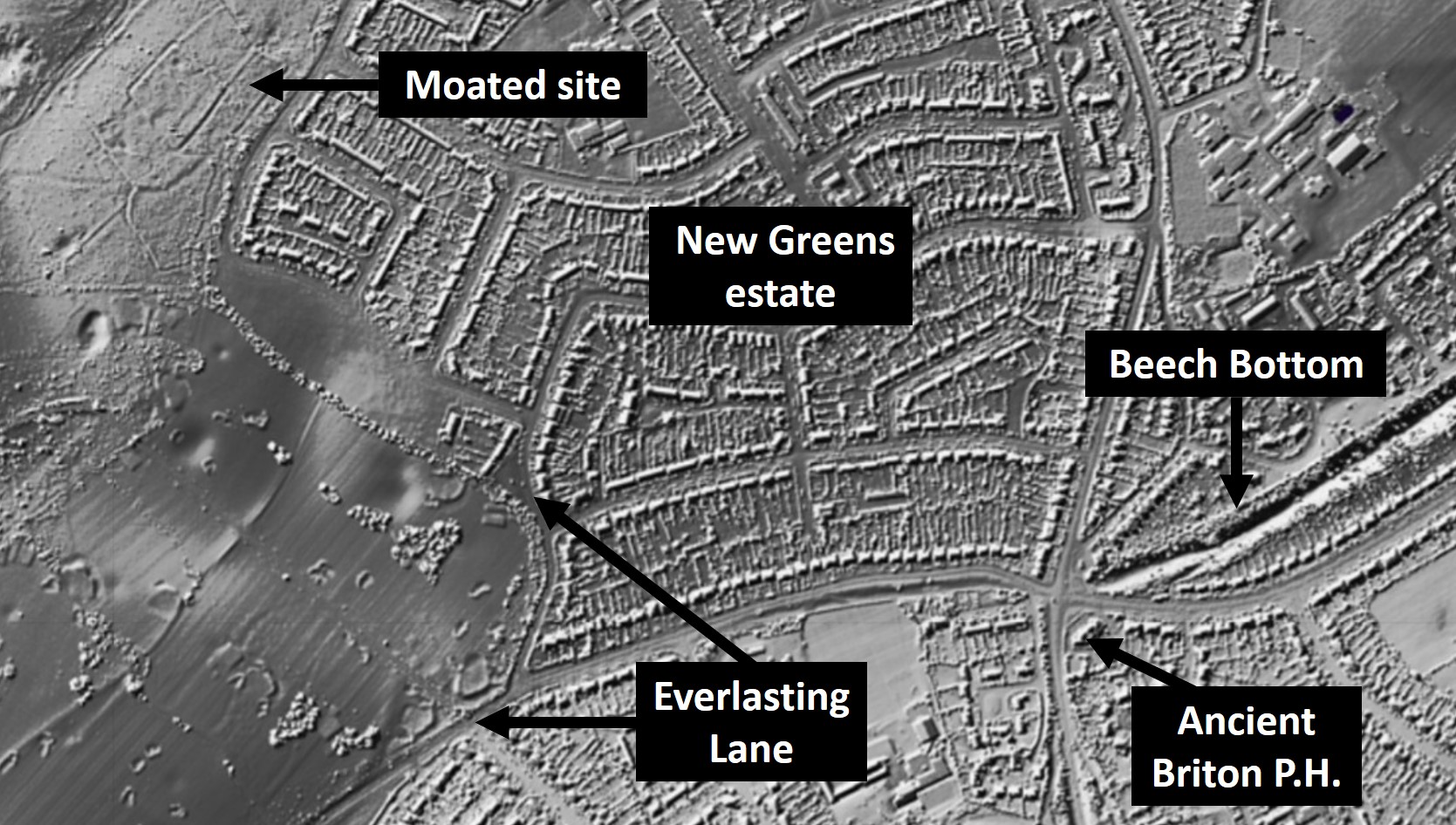 More recent LiDAR images show the layout of the complex very clearly and the now disused continuation of Everlasting Lane from the corner of a small green at the junction of Green Lane and Francis Avenue to Batch Wood is clearly shown both on the LiDAR image (Fig. 2) and the 1st edition 6-inch Ordnance Survey map (Hertfordshire Sheet 34) surveyed between 1872 and 1878, but it had gone by the time the map was revised in 1897.

A close examination of the LiDAR image shows that the old lane was directed towards the entrance to the outer enclosure of the site as indicated on Jonathan Hunn’s plan.(4) The conclusion seems obvious: that during the Middle Ages Everlasting Lane linked the manorial centre of Kingsbury with the ‘manorial complex’ of Batchwood.

When Prof. Levett studied the fourteenth century copy of the Kingsbury court book, extant for the years 1240 to 1331, she noted that the courts were held variously at Westwick, Childwick and Kingsbury, showing that these centres were linked and under the jurisdiction of the cellarer and subsequently the refectorarius of the abbey.(5) Further, the Gesta Abbatum Monasterii Sancti Albani tells us that ‘Childewikshaye alias dictum Bacheworthe’ – Childewikshaye was also known as Bacheworthe in the fourteenth century.(6) Childwickshay being ‘the (ge)hæg or enclosure adjoining Childwick’.(7)

Until recently it was thought that deer parks were a Norman introduction, but it is now believed that the Old English ‘(ge)hæg’, Middle English ‘hay’, a fence or enclosure, sometimes referred to a pre-Conquest deer enclosure. A fourteenth century reference to a field in the manor of Batchworth (Batchwood) that butted up to ‘Childwyk [deer] park’ suggests that Childwickshay was a hay.(8)(9) It might be mentioned as a footnote that the place-names Kingsbury, Westwick and Childwick suggest an interesting functional relationship within the abbey, and possibly earlier, estate. As the place-name scholar Richard Coates observed, Hertfordshire has an unusual number of place-names ending with Bury; Cyngesbyrig, mentioned in a late Saxon will being one of the earliest recorded.(10) The meaning of OE burh changed over the years but there is little doubt that in the late tenth century it was applied to a fortified enclosure or a secure estate centre.

The precise location and form of Saxon Kingsbury are disputed but it was clearly in the area of St Michael’s Church. Westwick and Childwick both contain the OE wīc, the meaning of which also varied over the years but during the Middle Ages it often meant a farm and, more especially, a dairy farm. The implication here is that Westwick and Childwick were outlying farms whose produce was collected and stored (some consumed and some sold) at Kingsbury. Perhaps the next time I walk up the lane I shall hear the creaking ox cart and the crunch of its iron-bound wheels on the stones as it makes its way slowly to Kingsbury, laden with produce from the outlying farm of Childwick. I would be delighted to receive any comments you may have about this article via: newsed@stalbanshistory.org.

(3) Cartographic material: Verulamium Museum. 1980. Batchwood, St Michael’s, site of the manor of Childwickshay or Bachesworth (survey of earthworks). Cited in Hertfordshire HER