You are here: HomenextBuildingsnextThe Clock TowernextF.G. Kitton: artist and illustrator 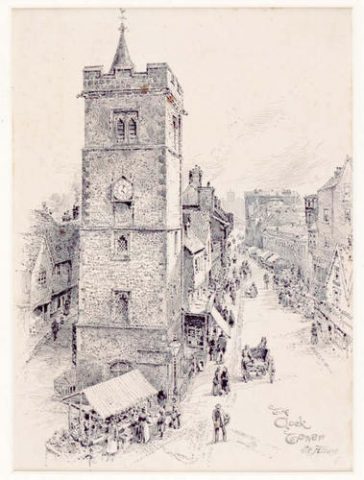 Born and trained in Norwich, Frederick George Kitton became an illustrator on the staff the The Graphic (1874-1889). He moved to St. Albans in 1878 and began compiling books about Charles Dickens and the places the latter had used in his books, for which Kitton provided the illustrations.

From St. Albans he travelled extensively and produced illustrations of many places in  Hertfordshire and neighbouring counties. He married in 1899 and when he died in 1904, there were no children.

Earlier in his life he undertook a journey with H. W. Winter, a cousin &  fellow-artist, from Norwich to London and on to Derby. They travelled as itinerant musicians and, where they played successfully in public houses and inns en-route, slept in beds but otherwise slept under the stars.

A local newspaper journalist informed the author of this item that Kitton contributed a weekly feature to the Hertfordshire Advertiser and St. Albans Times, but, while he did contribute a number of pictures of local hostelries and street scenes, they certainly were not as regular as the journalist was led to believe.

Member of the Society

Frederick Kitton was elected to the membership of the St. Albans and Hertfordshire Architectural and Archaeological Society and the St. Albans Art Society, at whose annual exhibitions he judged the paintings, prints and drawings [Ed: a copy of an article written by Kitton for the Society’s Transactions is appended below]. It is known that in 1889 he contributed to an exhibition in York but so far no details of the subject have emerged.