You are here: HomenextBuildingsnextPubs and coaching innsnextA Confusion of Red Lions

A Confusion of Red Lions 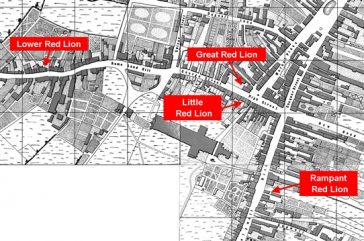 zoom
Map of St Albans showing location of the four Red Lions known to be trading in the 1700s
SAHAAS c.1820 map

Why does the Lower Red Lion have its unusual prefix? The answer lies in the 18th century pub trade in St Albans.

For those studying the history of the many inns and alehouses in St Albans, the 1756 billeting return is an important source of material. The government of the day commissioned this survey to assess the number of guest beds and the amount of stabling throughout the country to accommodate soldiers on the move. The results for St Albans list 49 establishments as well as the names of the respective inn- or alehouse-keeper. [1]

Useful though it is, the document also causes confusion; the problem of the town’s many ‘Red Lions’ being a case in point. Two with this name are listed. As the survey does not state where in St Albans these were, historians have conjectured as to their location. Untenanted at the time, the first was the Upper Red Lion which, in their useful book, Jolliffe and Jones correctly conclude was later called the Great Red Lion, a large inn with a prestigious history on the corner of the High Street and Market Cross. [2]

The second, just plainly called the Red Lion in the survey, had beds for ten guests and stabling for 30 horses. Jolliffe & Jones’s conclusion that this was the Lower Red Lion in Fishpool Street is wrong.[3] Evidence from several sources, the Abbey parish poor rate assessments in particular, indicates that this was another inn, the Rampant Red Lion on Holywell Hill. Around 1720, this Red Lion was one of as many as fourteen inns and alehouses sited along that short stretch of road from the corner of Sopwell Lane to what is now Victoria Street. It closed in the mid-1760s, probably one of several local inns falling victim to declining trade. As further support for this conclusion, no documentary evidence has so far come to light to suggest that the Lower Red Lion was trading before 1767. Studies of this building’s architecture have also proved inconclusive, one suggesting that it was a small alehouse in the late 17th century that grew over time, the other in step with the documentary evidence.[4]

There is one further Red Lion from this period, namely the Little Red Lion located on the High Street. This was a small alehouse, opened around 1790 and closed in 1910.

For over one hundred years, the prefix Great, Little and Lower would have been an important identifier. The Lower Red Lion serves to remind us of those times.

[1] The National Archives, WO 30/49, Inns and Ale-houses: Return of Accommodation for Men and Horses (transcription in SAHAAS library).

The history of most St Albans pubs trading between 1720-1914 can be traced using the St Albans Pubs Database , a copy of which is in the Society’s library.