All change at St Albans station 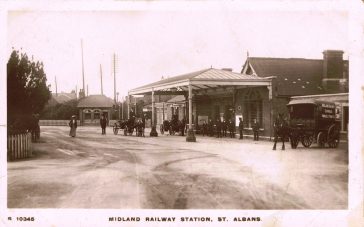 Train travellers to and from St Albans will be aware that work is progressing on a £5m scheme to improve the city station. The work will take around a year and should be completed in the summer of 2020. It is just the latest ‘improvement’ to be made to St Albans’ once typical Victorian station.

Just over 150 years ago, in 1868, the Midland railway line between Bedford and St Pancras was completed and stations on the route, including St Albans, opened for business. Thousands of workers, called navvies (from the word ‘navigators’) were employed to construct the large embankments and bridges along the route of the railway line through St Albans on what had once been green fields.

The workers lived in huts on site and had their own off licence as well as the nearby Midland Railway Inn (now the Horn) in which to spend their money. The workers’ encampment was disbanded in 1867 and the contractor Thomas Brassey auctioned off the material from 700 workers’ huts.

The goods station at St Albans came into use in March 1868. Passenger services began in July 1868 but terminated at the Metropolitan Railway Company’s Moorgate station as St Pancras station was still under construction – the delay was due to the complexity of the design. The formal opening of the line took place on 1 October 1868. The opening of the grand St Pancras Hotel was also delayed, until 1872, but this was because of financial difficulties.

The original rail bridge over London Road was a very attractive latticework design but was replaced in 1914 when the line was widened. The original station was on the down line, where platform four is today. At that time the address for the station was Victoria Road. Originally, the road that ran down to this area from the centre of St Albans was called Sweet Briar Lane. For a time it was named Victoria Road at the east end and Victoria Street at the west end but by 1897 the name Victoria Street had been adopted for the entire length of the busy thoroughfare. The other major development in the area during this period was the building of Her Majesty’s Prison in 1867.

Note: an article marking the 150th anniversary of the opening of the Midland railway line appeared in the August 2018 edition of the SAHAAS newsletter.