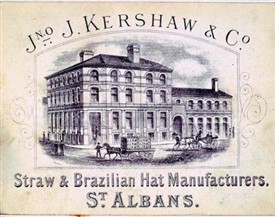 During the nineteenth century straw hat making was a major industry in St Albans. Straw was plaited by poor women and children at home, and sold to factories at the the weekly plait market. The plait was then sewn to make hats.

The image shows J.J. Kershaw’s hat factory on the north-west corner of Victoria Street and Upper Marlborough Road. This was built in the early 1880s as the local industry changed from plaiting to predominantly hat manufacturing. It was one of the first purpose-built facilities in St Albans.

By 1914 there were eight similar factories operating in the small area between what is now the main city railway station and the Town Hall in St Peter’s Street. Kershaw’s factory was demolished in the later 1900s.

You can find out more about the straw hat making industry in the early twentieth century by reading ‘Big business in St Albans in 1914‘.