You are here: HomenextBuildingsnextPubs and coaching innsnextThe Survival of the Six Bells

The Survival of the Six Bells 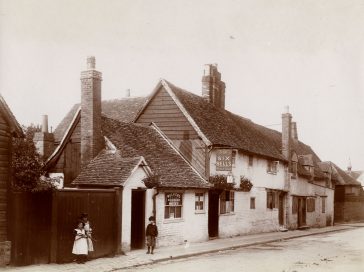 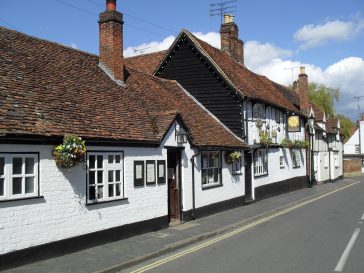 How the Six Bells survived its death knell

In early February 1914 the Six Bells was under threat of closure. The St Albans City magistrates announced that they did not intend to renew the licences of twenty of the seventy-five pubs in the city and the Six Bells was one of these (ref 1). The chief constable of the City police described the pub as ‘very old and the structural conditions very unsatisfactory’ (ref 2). In light of this, why did it survive the cull in which eleven pubs were closed?

For more than 30 years a polarised and politicised debate had raged between the brewers on one side and an increasingly noisy temperance lobby on the other as to whether magistrates had the right to shut pubs in places where there was too much competition. Brewers were keen to protect their substantial investments in licensed property in the late 19th century. Their most visceral opponents wanted to close all pubs. There was an obvious consensus position: pubs should be shut in return for the payment of compensation to brewers and publicans. But neither party was prepared to give ground. It was a pressing need.

The golden age of beer drinking had long passed. Nationally, per capita beer consumption had dropped by more than 20 percent from the late 1870s onwards as working class attitudes to beer changed (ref 3). In cities like St Albans, there were too many pubs to meet diminishing customer needs. For example, according to the City police, there was one pub for every 165 people in St Albans in 1901 (ref 4).

There were clear indications of stress in the pub trade with many pubs frequently changing hands. The White Hart had eight tenants in the ten years leading up to 1904 and the Post Boy seven, both of these being on Holywell Hill (ref 5). Many of the pubs were old and needed investment to bring them up to the standards expected by a wealthier working class but the brewers, encumbered with heavy mortgages, didn’t have the resources for this.

Parliament finally cut to the chase in 1904, passing a Licensing Act that gave the State the express right to close pubs other than for misconduct of the brewer or publican. It laid out a system whereby pubs could be shut in areas where there was deemed to be too much competition. The ultimate decision was in the hands of county magistrates, in Hertfordshire sitting as the County Licensing Committee (CLC). Local magistrates, in St Albans the City bench, passed them recommendations for closure.

In return for agreeing to close their pubs, interested parties such as brewers and publicans were awarded compensation from a fund levied on the brewers! The government forecast that 2500 pubs would shut each year. ref 6 However, an average of 600 pubs shut each year between 1905 and 1935.

In St Albans the magistrates nibbled at the edges of the problem. Just eight pubs were referred for compensation between 1905 and 1909 but then the CLC, aware that the compensation fund was finite and in fact decreasing in size irrespective of the annual levy, decided on a more structured plan (ref 7). They opted to close pubs in towns and villages where the competition between pubs was most intense, in Welwyn and around Buntingford for example (ref 8). St Albans was way down this list and it wasn’t until 1914 that the CLC turned its attention to city, the delay being much to the chagrin of the local temperance lobby (ref 9).

This hiatus must have been a dark cloud hanging over the heads of the local trade. As seen in the opening paragraph, the news when it came was ominous: the local bench wanted to close twenty pubs, the Six Bells being one of them. In the end the bench referred just eleven to the CLC and the Six Bells was not one of those.

Unfortunately available records do not provide a clear picture why it survived. The chief constable’s comment that it was structurally unsound is ambiguous. Maybe we should infer the obvious, that it was in danger of falling down. However, he had other interests in the structure of the building, namely how easy it was for his constables to supervise it. For example, he had expressed concern previously over the White Lion in Sopwell Lane as it had three exits through which miscreants could evade capture (ref 10). Whichever it was, the magistrates could order closure of the Six Bells without compensation if it was deemed to be structurally unsound.

The attorney representing the brewer, the Clutterbuck family of Stanmore, at the hearing raised three points in his defence of the pub. Firstly, the Six Bells was the only pub owned by the brewer in St Albans; secondly, that the Clutterbucks were an old Hertfordshire family and, lastly, that the pub was well-run by the tenant, Elizabeth Brackley (ref 11). What is missing is any evidence that the brewer intended to render the building more secure. On the basis of this information, it is difficult to believe that the attorney’s plea saved the day.

What probably made the difference was the action of another brewer, Benskin’s of Watford. Through acquisition they had a large tied estate in the city. Three of their pubs were within little more than 200 yards of each other in the working class area in Fishpool Street, namely the Unicorn, the Blockers Arms and the Crow. All were very close to the Six Bells. Benskin’s offered no objection to these being shut (ref 12). With the brewer’s acquiescence, the magistrates weeded out three pubs from a congested area and there was no need to close any others. The Six Bells survived.