You are here: HomenextBuildingsnextPubs and coaching innsnextThe Real History of the Fighting Cocks

The Real History of the Fighting Cocks 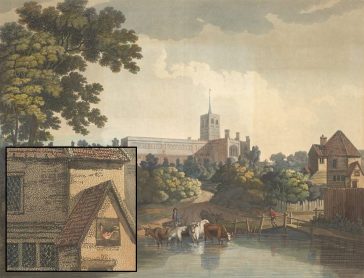 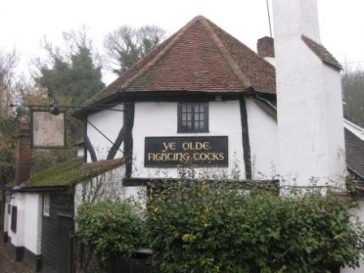 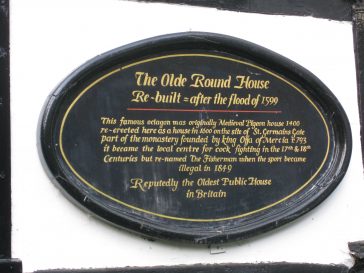 The oldest pub in Britain?

The history of the old public houses in St Albans is both fascinating and frustrating. On the one hand, understanding the history of establishments such as the Fleur de Lys, the Goat and the White Hart tells us much about the city’s past. On the other hand, tall tales surround so many of them that it is difficult to differentiate between history and mystery. For example, judging from several stories told to the author, the monks at the Abbey must have spent all their time digging tunnels to the town’s alehouses so desperate were they for a cheeky pint or two!

The history of the Fighting Cocks is perhaps the most enigmatic of the pubs in St Albans. A board giving a potted history of the place has hung outside the building for many years (see Fig. 3). The problem is that this outline, such as it is, mixes conjecture and inaccuracy. For example, the Fighting Cocks was never called the Fisherman. The latter was a beerhouse trading from around 1849 to 1860 further up Abbey Mill Lane towards the Abbey Gateway. So, the board’s picturesque tale of the pub’s renaming in 1849 is wrong, something based on the conjecture of an historian writing in the 1960s.

Whoever wrote the potted history on the board was more or less on solid ground when he or she noted that a “Medieval Pigeon House 1400 (sic) re-erected here as a house in 1600”. Pleadings in a legal case filed in 1622 state that Thomas Preston “… bought an old pigeon house and pulled the same down and erected it … and afterwards put up a chimney and made thereof a tenement which is now called the Round House.” However, the precise date when the building was re-erected is not certain, a safer conclusion being that it was sometime between 1600 and 1622.

What evidence is there to support the assertion that the pub was the “local centre for cock fighting in the 17th & 18th centuries”? Unfortunately no proof has so far come to light for this. Even the supposed location for the cock-pit, so small a space, is dubious. The first written reference to a pub called the Fighting Cocks in St Albans is in electioneering material in 1806, a time when cock fighting was still legal. There is a possible earlier allusion to the name. The image on the sign on the pub in the right foreground of the picture of the Abbey (see picture above) shows a bird that is more cock than pigeon! (see inset in Fig. 1) This was drawn around 1798. Of course neither the picture nor the 1806 reference proves that the pub was a venue for cock fighting.

This brings us to the most contentious point on the board. As several other pubs claim that they were trading before 1300, can the Fighting Cocks really be the oldest public house in Britain? The simple answer is that it is very unlikely. We do know that it was trading as an alehouse in 1756 but under the sign of the Three Pigeons, an unsurprising name bearing in mind the building’s origins. This is the pub’s earliest confirmed date found so far even with the extensive research conducted by this Society into, particularly the second half of, the town’s 17th century history. Absence means nothing in this context though.

Documentary evidence takes us so far. There’s a further problem however. We have already seen that the building was re-erected at its current location in the early 1600s. What has surprised architects and archaeologists alike is that the cellar, supposedly the footings for a previous monastic building, are the same unusual shape as the building itself.

With its origin no earlier than 1600 and with other pubs claiming to have been trading in the 1200s, the Fighting Cocks’ right to the title of the oldest public house in Britain looks very slim at best.

With thanks to Chris Saunders and the late Gerard McSweeney for their comments on an earlier draft of this article.

This article was originally published in January 2013 in the Herts Advertiser newspaper in a series of articles contributed by SAHAAS members. We are grateful to the newspaper’s editor for his permission to republish the article here.