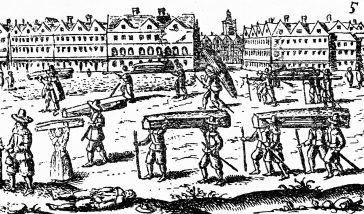 zoom
A view of the Great Plague in London, 1665

The power of the Black Death of the late 1340s and the 1665 Great Plague of London to evoke horror continues long after we have left school. Rightly so when we recall that the former killed something like 50 per cent of the population of England. But as there were outbreaks of contagious disease every 20 years or so in the late 16th and early 17th centuries, this focus blinds us to the experience of our predecessors in St Albans some 400 years ago. Just how significant were these outbreaks and what were their effects?

Let’s start by addressing the first of these two questions. In lieu of any surviving diaries or personal accounts from this time, to test the seriousness of any outbreak we have to rely on the burial registers for the Abbey and St Peter’s churches.[i] Population historians question how reliable sources such as these are, especially when registers for just two parishes are being considered rather than an extended sample. But they are all we have for St Albans.

From an analysis of the two sets of burial registers covering the 1558 to 1675 period, one year stands out. This is 1578 when, in a period of just seven months, 409 people were buried at the churches. This figure equates to around 15 per cent of the town’s population.[ii] In contrast there were just 37 and 33 burials in 1577 and 1579 respectively. We can see similar problems in other crisis years such as 1625, 1636 and 1637 albeit with fewer burials.[iii] However, from 1638 onwards, spikes become less obvious. The absence of any significant problem in 1665 comes as a surprise although records for the Abbey parish do record that “the town was visited”.[iv]

Care needs to be taken when considering these figures. Obviously, not all the burials would have been the result of plague. Moreover, what exactly was the cause of death? Locals certainly ascribed deaths to the ‘plague’. For example, a marginal note in the St Peter’s register against the long list of burials in 1578 states “the plague”, a useful indicator if contemporaneous; the 1636/7 petition referred to below indicates the same source for the contagion; and according to a ledger stone at St Peter’s church, nine-year old Anne Arris died from the plague.[v] The inscription reads:

However, our ancestors used the word as a general catch-all for a number of different diseases such as smallpox. So, the outbreaks in St Albans may have had other causes rather than just the expected bubonic plague.[vi]

Moving on to the second question: what were the effects of these outbreaks? Surprisingly, St Albans was probably full of strangers trying to escape the disease in London.  For example, in 1578, surviving letters confirm that the town, like others in Hertfordshire, was a bolthole for Londoners hoping to isolate themselves away from the crowded capital.[vii] In 1594, the Westminster law courts were removed to the Abbey during another outbreak.[viii]

These examples talk to dislocation and isolation, familiar themes to us today that can be explored through a petition to the King from the town’s inhabitants. At the height of the 1636/7 outbreak they asked to be let off payment of £120 towards a levy for the contentious Ship Money. According to the petition, St Albans was:

altogether disabled … by reason of the town consisting chiefly of inns and victualling houses, who drive a trade upon the travelling of passengers, but have had not trade for this year past, by reason of London having being so grievously visited by the plague.

Not only was trade non-existent but the cost of countering the disease was on the rise. According to the petitioners, the inhabitants were “at great charges in fitting up a pest house, and maintaining it with watchmen, searchers and others.”[ix] The importance of this phrase goes beyond its financial implications as it also shines light on contemporary public health policies. From the late 1500s onwards ‘plague orders’ were imposed by the government with every fresh outbreak. The orders obligated local authorities to establish and maintain a temporary system of quarantine and isolation. The aim of the system was to protect the rest of the community by withdrawing freedom of movement from those suffering from the plague – as well as some who were not. In simple terms it had two major components:

The sad case of Elizabeth Covinton

There’s an earlier reference to a local pest house in the 1603 will of Elizabeth Covinton.  Because she was living there, her will had to be ‘nuncupative’, that is a document not written or signed by the testator but whose contents had been faithfully recorded by witnesses. On this occasion, Elizabeth could only communicate details of her wishes by shouting across a field to her sister and the other witnesses. This abstract from their faithful record takes us right back to the sad scene:

The witnesses came with Elizabeth’s sister, Sara, to comfort her [Elizabeth] and see how she did … They stood in the field over against the sick house where they saw Elizabeth lying against the door. They called and asked her how she did. She answered “I am very sick” and, holding up her head she saw her sister and said “O Sara thou woldest never come to me till now. I gave thee all that I have but I would have thee give to my brother Robert a sheet and 2 shillings in money.[xii]

Elizabeth was dead and buried 24 hours later. Thankfully isolation in St Albans due to disease in the 21st century doesn’t mean that people die alone. At least, that’s what we hope.

Many thanks to Pat Howe, Julia Merrick, Alison Metcalfe and Kate Morris for commenting on earlier drafts of this article.

There is opportunity for further research into the response of St Albans to these various incidences of plague as two readily available sources have yet to be studied in depth. These are the early 17th century mayors’ accounts and St Peter’s churchwardens’ accounts which may throw more light on illness and isolation four hundred years ago.

[i] Some of the analysis quoted in this section is based on notes by Mike North in the Society’s Library. Note: St Stephen’s parish was outside the town boundaries so out of scope of this research; also, while part of St Michael’s parish lay inside those boundaries, the surviving registers only start in 1643; and figures for St Peter’s will also include burials for those living beyond the boundaries in the rural part of the parish.

[v] Thanks to Sheila Green for pointing out the St Peter’s church example. The (amended) inscription is recorded in St Albans Hertfordshire: monumental inscriptions of the parish church of St Peter, published by the Hertfordshire Family History Society (1999).

[viii] M. Freeman, St Albans: a history (2008), p. 145. The inhabitants were required to pay for necessary alterations to the fabric of the Abbey. For more about the problems with collecting this money, see A.E. Gibbs, ‘Two Briefs for repairing the Abbey Church of St Albans’, Middlesex and Hertfordshire Notes and Queries, vol. 1 (1897), pp. 97-99 and 142-3.

[ix] Calendar of State Papers Domestic, 17 February 1636/7. The petitioners may have exaggerated their situation to avoid paying what many in the country thought was an egregious levy.

[xi] The location for these pest houses is uncertain. Kate Morris has suggested the later building may have been in Sandpit Lane, outside the borough boundaries. Pers. comm. Jon Mein, 16 March 2020. The description of the general system is based on Newman, p. 812.