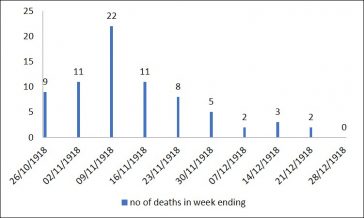 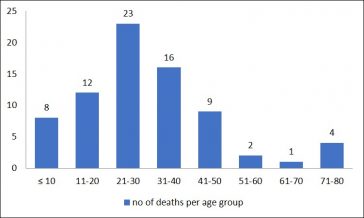 Influenza is an infectious viral disease which affects the respiratory tract. The 1918/19 flu pandemic killed many millions of people worldwide with estimates varying between 20 and 100 million.[1] It is not definitely known where it originated but possibilities suggested have been amongst the allied troops in France, in mid-west USA or in China[2].

However, a recent BBC television documentary[3] made a convincing case for its spread from a single case in Kansas, via an American army training camp to the Western front. The first reports of an epidemic came in May 1918 from Spain. As the country was not involved in the war there was no censorship of the press as there was elsewhere. The virus therefore became known as Spanish flu.

There were probably about 24,000 people[4] living in St Albans when the epidemic reached here. This included thousands of soldiers in training camps who remained after the armistice was signed on 11 November. Food had been rationed and prices controlled for some months so all the residents should have had equal access. There were some shortages still. The soldiers would have had more generous rations.

There were three hospitals available for nursing the flu victims: the St Albans and Mid-Herts Hospital[5], the workhouse infirmary[6] and Bricket House[7]. There was also the County of Middlesex War Hospital at Napsbury but soldiers wounded on the Western front were nursed there and were more likely to bring flu to the city than have room to nurse local flu victims.

In St Albans there had been two deaths from flu in July but the epidemic only took hold in late October, 1918. In the Herts Advertiser[8] of 19 October it reported ‘no epidemic’ locally although widespread elsewhere but the next edition reported ‘influenza rampant’. Dr May, the city council’s Medical Officer of Health, ordered the closure of elementary schools from 22 October for ten days and this was later extended to a total of three weeks.

Instructions from Dr May on how to avoid catching influenza had been circulated and were printed in the Herts Advertiser of 2 November. The main points were to have as much fresh air as possible, avoid crowded places, eat regularly and take gentle exercise but avoid over-tiredness. If flu developed it was essential to go to bed immediately in a well-ventilated room, isolate yourself as far as possible, and cover your mouth if you coughed or sneezed making sure to disinfect handkerchiefs.

The only treatment recommended was to gargle with a solution of permanganate of potash and salt. Later the council suggested the instructions should be re-issued but Dr May said he thought it wasn’t worth it as it had previously been ignored and people had still congregated in places of entertainment.

The Medical Officer of Health’s 1918 report[9] said there had been nine civil deaths by 26 October. It also gave the weekly numbers of civil deaths and the ages at death. From the weekly numbers it can be seen that the peak in deaths occurred in the first half of November and there was a lull in December. (See Fig. 1 above.) Dr May later reported[10] 27 deaths from flu in the first quarter of 1919 so the epidemic had continued.

During the rest of 1919 there were a number of milder cases but only five more deaths. The figures also showed that the most cases occurred in the 20-30 age-group and not amongst the very old and very young as usually happened. Only one was recorded as being under a year old. (See Fig. 2 above.)

Most of the patients were nursed at home and Dr May noted that numbers of deaths were greatest in good cottage properties with none in larger houses and very few in the poorer parts of town. The doctors, district nurses and chemists were all very overworked.

When the new mayor, Alderman Faulkner, was sworn in, as reported in the Herts Advertiser of 16 November, he said he wished to support the St Albans & District Nursing Association which relied on voluntary contributions and was in debt. He added that Dr May had told him that the district nurses had been working from five in the morning until midnight during the epidemic going from house to house to give help. The previous mayor, Alderman Flint, had been unable to attend the mayor-making as he had the flu.

Flu affected the city in a number of ways. The National Kitchen[11] had to close for several weeks in November as staff members were off sick. The sub-post office in St Peter’s Street shut in December as the only person still fit was the sub-postmaster’s wife. She couldn’t manage on her own and relief staff from the general post office weren’t available as there was flu there too.

On 23 November there was an appeal from the St Albans War Hospital Supply Depot for money but more particularly for more volunteers. They had recently been supplying pneumonia jackets[12] to the local hospitals for the flu cases.

There were many cases of flu among the soldiers probably because they were crowded together. On 29 October the army medical services asked the St Albans Board of Guardians, who managed the infirmary, for any available accommodation at the infirmary in order to help deal with the serious outbreak of influenza amongst troops stationed locally.

An emergency decision had already been taken that three wards could be made available. Forty-two flu cases arrived before the end of October with another four later. Altogether nine of them died and also one of the charge nurses who had been caring for them. Most of those who recovered stayed there about ten days but the last wasn’t discharged until 25 November.

As well as the infirmary wards the army took over the YMCA in St Peter’s Street as a hospital for 70 flu patients but there don’t seem to have been any deaths there. Bricket House VAD hospital was clearly badly hit by the epidemic and 17 of the soldiers died in the last quarter of 1918 and many of the nurses had flu.

The volunteer Royal Army Medical Corps helped by taking over some of the night duties and coping with delirious patients. VADs who had left the hospital returned to help and local women also assisted as Canon Glossop’s wife, one of whose daughters was a staff nurse there, served as a part-time nurse from October 1918. There were also many cases at the war hospital with so many of the staff affected that a special ward had to be set up for them.

It is clear that in St Albans as noted elsewhere the flu tended to attack the fit rather than the weak or infirm. The large numbers of soldiers affected is perhaps surprising since army rations were good and they probably had better food than the civilians but they would have been crowded together.

In her book, Mary Dobson said there was renewed interest in the Spanish influenza pandemic by epidemiologists who wanted to study the spread of the disease as they thought another was quite possible.[13] The documentary programme also said this was quite likely. How right they all were!

Many thanks to Jon Mein for his help and advice and to Sue Mann and Susan Bellamy for their comments on an earlier draft.

[1] This article is based on material gathered during the SAHAAS Home Front project much of which was passed to me by Elanor Cowland and also by members of the project team, especially Susan Bellamy.

[4] The population was about 24,000 at the start of the war but many of the normal residents were away in 1918 and the locally billeted soldiers would have made up the numbers.

[5] This was the general hospital which relied heavily on public donations and where patients were expected to pay for treatment.

[6] The infirmary provided a free service to poorer patients but expected a contribution if that was possible.

[7] Bricket House Hospital was set up early in the war to cater for the soldiers billeted in St Albans. It was mostly staffed by members of the local Voluntary Aid Detachment (VADS) who were usually unpaid, middle and upper-class women but with a qualified commandant, a few qualified nurses and an army medical officer.

[8] The Herts Advertiser was the local paper as it still is today. However it was much more important for disseminating both local and national news before the advent of radio and television.

[11] This was the kitchen set up not long before to provide cheap meals.

[12] These were padded jackets designed to maintain body heat and help breathing.