zoom
Settlement certificates issued by St Michael’s parish in the 18th century illustrate the humiliation of becoming destitute in a place where you had no legal right to poor relief, or were caught begging and branded a rogue and vagabond.
St Michael’s Church/Frank Iddiols. 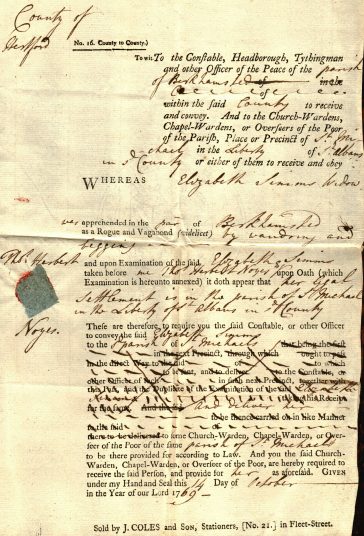 If you were found wandering and begging during the period from the 1600s to the 1700s, you would be apprehended as a rogue and a vagabond and faced being deported back to your legal place of settlement.

This was the fate of widow Elizabeth Simms, found roaming the streets of Berkhamsted in 1769. She was more than likely whipped before being ‘delivered’ to the constable or overseer of St Michael’s in the Liberty of St Albans.

For over 230 years parishes were legally bound to support the poor and with so many economic migrants passing through St Albans, this placed a heavy burden on local poor-rate payers.

Establishing settlement rights was a means of removing those that had no entitlement to local poor relief, like Ann Turner who in 1785 was returned from St Albans to Hackney, her legal place of settlement, with her four children, aged six, four, two and ‘about 3 weeks’.

Conveyance would have been by cart and those being sent ‘home’ would pass from parish to parish in the charge of local constables until they reached their destination.