Triumphant visit of Victoria and Albert

The people of St Albans were among the first among thousands in the Home Counties to be visited by the young Queen Victoria and her husband Prince Albert. The couple were only passing through on their way to and from Panshanger Park but nevertheless every effort was made to ensure the visits on Thursday 29 and Saturday 31 July 1841 would be triumphant and memorable.[i]

The Queen made two expeditions that summer. The first was to Nuneham House in Oxfordshire and the second took the royal couple to Woburn Abbey, home of the Duke and Duchess of Bedford, and from there to the Hertfordshire home of the Earl and Countess Cowper at Panshanger.[ii]

On the journey from Woburn the royal party entered St Albans via Verulam Road, arriving at the High Street where an elaborate 120-foot long triumphal arch had been erected. A ‘Mr Boutell’ was credited with planning this, almost certainly the Revd Charles Boutell of Sandridge parish who in 1845 became one of the founding members and first secretaries of our society.[iii] He was an expert on heraldry and it was perhaps for this reason that he was invited to plan the triumphal arch ‘formed of different foliages, on which were various ornamental devices, the whole surmounted with different emblematic flags’. The structure included seating with a canopy at its centre formed of the Royal Standard. Another immense Royal Standard flew from the Clock Tower.[iv] 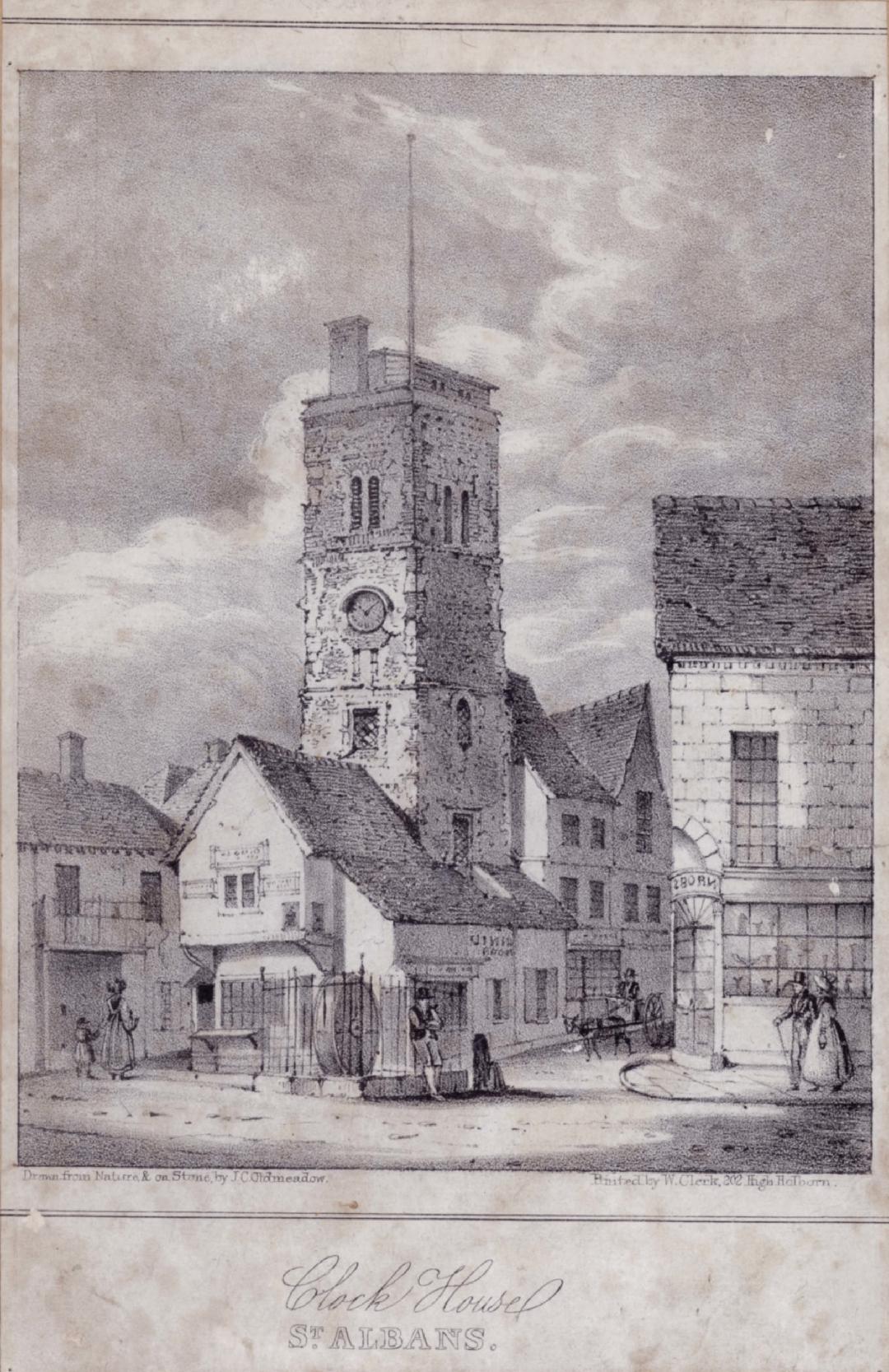 Sketch of the Clock Tower c.1840 showing flagpole from which the Royal Standard flew for the Queen’s visit. J.C. Oldmeadow  (St Albans Museums)

The mayor John Horner Rumball met the royal carriage near the Verulam Arms Hotel with a welcoming party including members of the organising committee, boys from the Blue Coat School, girls from the various parish schools and the Corporation’s sergeant-at-arms bearing the mace. They led the way to the triumphal arch under which the Queen’s horses were changed before her carriage proceeded onwards as the band played Rule Britannia, passing up Chequer Street and St Peter’s Street at a rapid pace.

The Queen noted her impressions of St Albans:

The old abbey is very fine and looks so well, as one approaches it. The town was immensely full and decorated with great taste and there were triumphal arches etc without end.[v]

Returning from Panshanger Park the following Saturday, the royal party entered St Albans via St Peter’s Street, stopping in front of the Turf Hotel in Chequer Street where the horses were changed. Whilst detained at this spot the National Anthem was sung by local church and chapel choirs. The royal carriage then moved off at a very slow pace down Holywell Hill which was ‘covered with brilliant equipages, equestrians and pedestrians of all kinds. It was like a huge sea as you looked on it from an eminence. Laurels, flowers entwined into fantastic wreaths and white satin rosettes were everywhere. This important event in the annals of the town was celebrated in the evening by a brilliant display of fireworks, and the town was a scene of hilarity and universal merriment’.[vi] The Queen noted in her journal:

It being market day the town was still more crowded than the other day and we again met with a very kind reception.[vii]

The two royal expeditions in the summer of 1841 helped to unite the country at a time of bitter political conflict and bolster the Queen’s standing, which had been dented by two incidents in 1839 – namely, the so-called Bedchamber Crisis and the Hastings scandal.[viii]  A letter to her uncle King Leopold indicates that the expeditions were designed to appeal to the masses: ‘Our little tour was most successful, and we enjoyed it of all things; nothing could be more enthusiastic or affectionate than our reception everywhere. I am happy to hear that our presence has left a favourable impression, which I think will be of great use.’[ix]

This was not Victoria’s first visit to St Albans. The princess passed through on a journey to Wales in August 1832 noting in the first of her many journals: ‘The situation is very pretty and there is a beautiful old abbey there.’[x]

[i] ‘Visit of Her Majesty and Prince Albert to Woburn Abbey, Panshanger and Brocket Hall’, Hertfordshire Mercury and Bedford Reformer (HMBR), 31 July 1841.