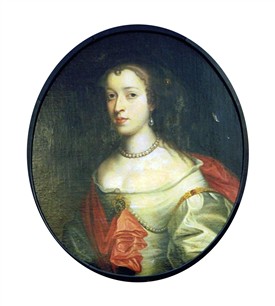 Admiral Henry Killigrew (c.1652-1712) had a distinguished career in the Navy during the wars against the Dutch and the French. A brave and popular officer, he was also entrusted with such diverse tasks as concluding peace with the Corsairs of North Africa and bringing the financial portion of Catherine of Braganza’s dowry to England.

In spite of his achievements, unjustified allegations that he was responsible for some naval defeats, which were, in fact, due to the incompetence of his superiors, together with the suspicion that he had Jacobite sympathies, led to his retirement as a somewhat disappointed man. However, he had bought the estate of St Julian’s in St Albans and thus became a prominent local landowner. Supported by the Duchess of Marlborough, he served as MP for the Borough from 1705-1708. No portrait of Henry has been found but an illustration of one of his ships, HMS Maudant, is shown.

A full account of his naval career and of his celebrated forbears is given in a paper previously published in Herts Past & Present (HALH), 3rd series, Issue No. 5, Spring 2005, and reproduced at the bottom of this article.

After leaving the Navy, Henry Killigrew retired to St Albans, leasing St Germain’s Farm, now Verulamium Park, and buying St Julian’s Farm on Watling Street as his residence.  He soon became involved in the convoluted politics of St Albans, in which Sarah, Duchess of Marlborough, intervened in her characteristic manner. The local disputes and accusations of sharp practice reached national and parliamentary level but Henry was elected, sitting as MP from 1705 to 1708.

Towards the end of his naval career, he had married Lucy Jervoise, from the distinguished family of Herriard in Hampshire. Some of Lucy’s early letters before her marriage and sent to her brother, a lawyer and MP, provide a fascinating light on her social and family life in the 17th Century, including some amusing snippets of gossip, typical of a young lady mixing in gentry circles, from the fitting-out of an aristocratic son for his wedding to some of the gruesome details of crime in London. Her portrait is the only one so far found in the public domain of a 17th Century female resident of St Albans, apart from that of the Duchess of Marlborough.

Lucy’s letters from St Julian’s after marriage, together with those of Henry, are fewer but give a glimpse of his life as a local landowner, including, for example, details of the purchase of a flock of sheep, which were then driven sixty miles from Hampshire. Although this was the normal method of transporting live animals, it appears to be the only account we have as far as St Albans is concerned.

They had three surviving daughters so the surname of this branch of the family died out on marriage. However, the name itself survives as the name of a local school.

A full discussion of the above appears in a paper first published in Herts Past and Present (HALH), 3rd series, Issue No. 17, Spring 2011, and reproduced at the bottom of this article.