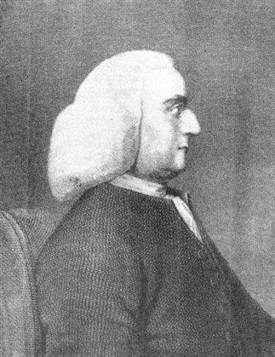 On a simple slab in St Peter’s churchyard is the inscription ‘Here are deposited the remains of Ann, Hannah and Nathaniel Cotton’.

Dr Cotton deserves to be better known locally but this is probably his own fault for, as this brief inscription suggests, he was a very private man. The St Peter’s Church burial register says of him that when he died in 1788 he was ‘88 at least’. This is definitely an overestimate but we can’t be sure of his exact age as a possible baptism record says he was born in 1705 whereas he thought he was born in 1707.

His desire for privacy is made even more clear in the preface to his book ‘Visions in Verse for the Entertainment and Instruction of Younger Minds’ published anonymously in 1751. This says:

“All my ambition is, I own,

To profit and to please unknown,”

At the time it was very popular and went through at least seven editions but the high moral tone would not be appreciated today. It stressed the importance of contentment with your station in life and need for good behaviour. Two typical lines are:

‘For he who at his early years

Has sown in vice, shall reap in tears’.

Of greater interest now is his enlightened approach to mental health problems when Bedlam was the standard for the 18th century. His name occurs in a list of English students at Leiden University, Holland in September, 1729. He was studying medicine under Boerhaave who was the most eminent teacher in Europe and the first to emphasise the importance of seeing real patients. According to an account of Cotton’s life in the 1807 Gentleman’s Magazine, after graduating MD in 1730 he became an assistant to a private asylum owner in Dunstable. Later Dr Cotton moved to St Albans with some of the patients and the housekeeper and set up his own asylum and private medical practice. We don’t know when this was but in 1738 he married Ann Pembroke, whose family lived in Dagnall Street, and by 1739 he lived in a house in St Peter’s Street.

In 1749 Dr Cotton published his only work, apart from his thesis, on a medical subject. This was “Observations on a particular kind of scarlet fever that lately prevailed in and about St Albans.”  Here we see his practical approach to mental health problems. He described the depression which often followed  scarlet fever and caused particular fear as night approached and said that the only cure he knew was fresh air and a good diet as drugs were useless.

Around 1757 Dr Cotton leased a large house in (Lower) Dagnall Street specifically for his asylum patients. It was known as the ‘Collegium Insanorum’ and some of it survived until 1910. It is remembered today because College Street, built along its east face in the nineteenth century, refers to it. We know that after 1774 when private asylums had to be registered there were at most six patients and as the fees per week varied between 3 & 5 guineas it was clearly only for the wealthy.

His most famous patient, the poet, William Cowper, came to the ‘Collegium Insanorum’ in December, 1763 and stayed until June, 1765. Cowper later wrote an account of his illness in which he was full of praise for “my little physician”. Cowper was suffering from a nervous breakdown and had tried to kill himself. Dr Cotton’s treatment seems to have consisted of close supervision, persuasion to occupy himself and the strategic placing of bibles. This suggests he was tentatively moving towards the development of clinical psychology at a time when inmates of public asylums such as Bedlam received no treatment except restraint  and public humiliation. He was clearly ahead of his time in this although other private asylum owners may have been experimenting with similar methods.

One detail of Dr Cotton’s life which is still not clear is his church affiliation. Local Nonconformists assume he was a member of the Dagnall Street Presbyterian Church. We do know that he corresponded with Dr Samuel Clark, the minister there, and with Dr Philip Doddridge, a noted Presbyterian, but can find no evidence of church membership. On the other hand his seven children by his first wife Ann, who died in 1749, and three by his second wife Hannah were all christened at St Peter’s Church and his eldest son became a Church of England vicar. In any case he was a devout Christian and as the Gentleman’s Magazine says “He was pious, mild and good-tempered”.

This article was originally published in May 2013 in the Herts Advertiser newspaper in a series of articles contributed by SAHAAS members. We are grateful to the newspaper’s editor for his permission to republish the article here.