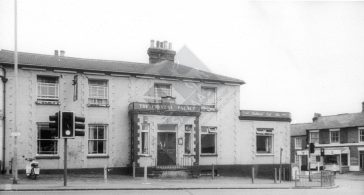 In the November 2015 newsletter, Sue Mann described the background to the cricket match consisting of one-armed and one-legged players sketched by John Henry Buckingham. The match was promoted by James Gentle in 1868. Now forgotten, this St Albans publican would have been familiar to our Victorian predecessors. So significant was he that the editor of the local Herts Standard newspaper devoted a 1000-word obituary to him when he died in 1899, a tribute usually reserved for a local dignitary. What had Gentle done to merit this?

The answer lies in his cricketing prowess in particular as well as his general contribution to the burgeoning sporting scene in this small market town in the 1860s and beyond. Cricket matches, as Buckingham’s sketch shows, were then a summer highlight often drawing enthusiastic crowds to the grounds on Bernards Heath and Verulam Road. Though Gentle played against W.G. Grace on several occasions, his obituary writers focused on his time playing for the successful St Albans club. Competing against touring teams as well as those from local villages and towns, the club brought together men from a variety of backgrounds. Certainly it had its share of attorneys and vicars but there were others, like Gentle, cut from different cloth. His father was a labourer and James had been a straw hat presser. The stalwart Westall brothers came from similar stock.

Gentle was an all-rounder with a reputation as an obdurate batsman and a capable lob bowler or ‘under-hand trundler’ as one of the obituaries described his action. What thrilled the crowds though and set him apart was his fielding. At this time wicketkeepers’ skills were restricted by poor quality gloves. It was the role of the long-stop, a player fielding directly behind the ‘keeper on or close to the boundary, to clear up anything that escaped them. Gentle was the team’s long-stop and his short, rotund stature made him ideal for this position. Writing some fifty years later about his memories of St Albans cricket, Revd Harry Ward McKenzie still recalled him as being ‘wondrous in that position’. Gentle’s obituary writer confirmed this and we can infer from the following extract that his reckless style, more familiar to modern spectators, was what excited contemporaries:

It would be an exaggeration to say that he never missed a ball, but those who remember the games in which he played will bear out our statement when we say that he was a very miserable man if a ball should get by him … If he could not stop them with his hands he did so with his body.

Gentle was also the club’s caterer. The quality of the cricket tea was as important then as it is today and Gentle’s were fondly remembered by McKenzie:

Cold beef we had, cold lamb, new potatoes, peas, lettuce … gooseberry pie, custard, cheese and beer, or better shandygaff*. There was [Gentle] handing you everything, determined that you should have plenty, beaming with smiles and good fellowship…

It comes as little surprise to learn that Gentle provided a catering service for civic and social events. He developed other commercial interests as well, for example in the straw hat trade and also sporting equipment sales for which his adverts in the local papers were a weekly fixture. These businesses were based at the Crystal Palace public house on London Road which he ran for eighteen years. Under Gentle’s management, the pub became an informal clubhouse for local sportsmen: the town’s cricket and football teams met there as did the bicycle club. What must have been a spectacular sight, the departure from the pub of over 100 cyclists on a tour of the town, was recorded in the Herts Advertiser in 1878.

The Buckingham sketch of Gentle’s match reminds us of his contribution to the social life of this small town. It is a shame the artist did not record Gentle’s next promotion, a St Albans XI versus 16 clowns.

* Shandygaff was a mixture of beer and ginger beer.