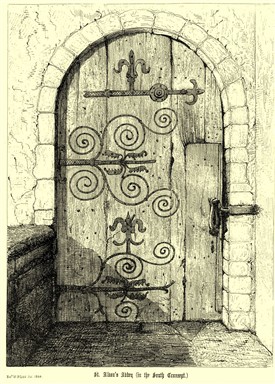 Teaching for two years in the Lady Chapel, where the grammar school then was, Lee knew the abbey on a daily basis and wrote A Short Account of the Abbey of St Albans, no copy of which has so far been found. He also took an active part in the Architectural Society: at the Annual Meeting held on 20 June 1849 he read the Annual Report (possibly in the capacity of Honorary Secretary). He also drew for M.H. Bloxham’s paper on ‘Roman Sepulchral Remains’, delivered on the same occasion, the Roman glass and pottery vessels discovered at St Stephens the previous year.

His drawing of the Romanesque door of the abbey slype [covered passage, especially one between the transept and chapter house of a cathedral], reproduced in Monograph No. 1 of the Fraternity of Friends, The Chapter House of St Albans Abbey, is labelled in Gothic letters, ‘St Albans Abbey (in the South Transept)’ and below the left-hand corner in the same but smaller letters is his by-line: ‘Revd. T.F. Lee Del. 1849.’ This copy of his drawing (now in St Albans City Library, Local History Section, Y 2350 (V10)) appears to be a lithograph, and was therefore presumably published, but where is not known.

Another version, possibly the original pen-and-ink drawing, without the title but apparently labelled below the left-hand corner ‘Revd. T.F. Lee 1849’, is known only from a less than absolutely sharp photocopy, a copy of which is in the Project Archive.

Any further information about Lee, his Short Account of the Abbey, and his drawing of the original door of Abbot Robert de Gorron’s slype would be most welcome.