A chance discovery in a Kent antiques shop led Jon Mein, Frank Iddiols and Ros Trent to look further into the life of a master map engraver who made St Albans his home

A chance purchase in a Kent antiques shop led us to investigate the life of 18th century map engraver, Thomas Kitchin. Having bought a copy of one of his maps of Hertfordshire, Ros returned home to research who he was. It transpired that Kitchin was one of the most productive British engravers of the time. Of more local interest, he spent the last 16 years of his life living in St Albans and was buried in the Abbey.

Who was Kitchin and why did he come to live in the town? Thanks to excellent biographical research by maps expert Laurence Worms, the first question is the easier to address. 1 Born in London in 1719, Kitchin was apprenticed 13 years later to leading map engraver and future father-in-law Emanuel Bowen. Worms notes that Kitchin, working in his own right by 1741, went on to produce inter alia the first pocket atlas of Scotland (Geographia Scotiae, 1748–9); the co-published Small English Atlas (1749); and The Large English Atlas, serially produced county by county with Bowen between 1749 and 1760. In 1755 he engraved the Mitchell map of north America, which remained the standard map of the continent until 1800 or so. His output included several maps of Hertfordshire. 2 Out of work hours, Kitchin was an active member of Paul’s Alley Baptist Chapel close to the Barbican. 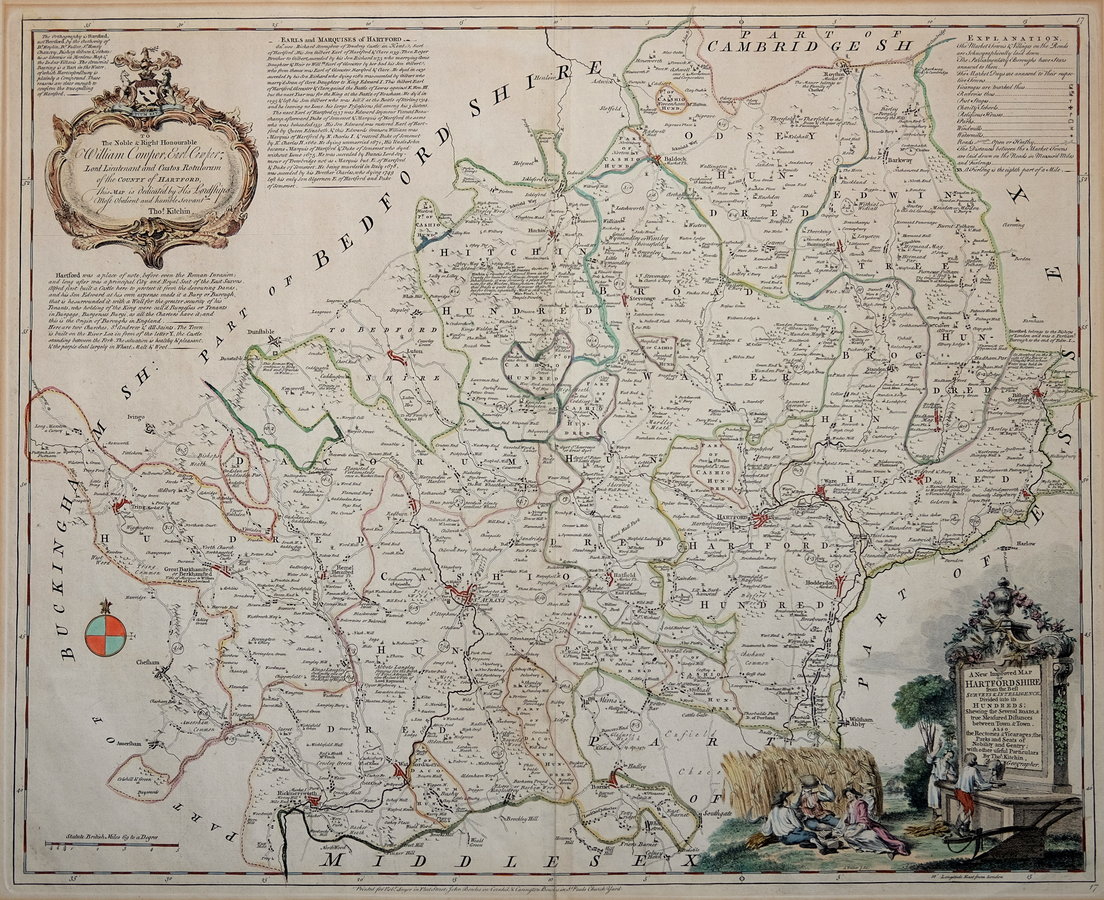 One of Thomas Kitchin’s maps of Hertfordshire (Public domain)

The move to St Albans

Around 1768 Kitchin and his second wife moved from London to what is now no. 7 Fishpool Street (Fig. 1). 3 Why they did so is not clear. Just shy of his 50th birthday, the decision has no hint of retirement about it as his productivity remained high. Worms suggests that, with his son now running the business in London, Kitchin ‘felt able to distance himself from the hurly-burly and to devote himself more fully to what he later called “a constant application to geography, and the arts connected with it.”’ 4 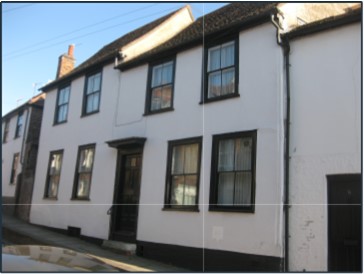 Perhaps there was a community of kindred spirits in St Albans who stimulated this “constant application”. Several of his former apprentices certainly followed him, living in the town for periods running from months to several years. 5 And, as Kate Morris’s ongoing research into the development of 18th century St Albans shows, they weren’t alone in making the move. Whatever Kitchin’s reasons were, the town’s increasing proximity to London must have been a draw. In the early 1760s, just a few years before he moved to St Albans, journey times to the capital by scheduled coach dropped by a third to around 3½ hours. 6 So, travellers could get to London, see to some business and then be home without burning the candle at either end.

With our ready access to local material, we have taken the opportunity to extend Worms’s biography of Kitchin. As far as we can tell, he didn’t throw himself into local life. For example, although elected to the St Albans turnpike trust in 1775,7 he didn’t attend any of the trust’s meetings and, if he was involved in the borough corporation, he wasn’t prominent.

Nor does his name appear in the Dagnall Street Baptist Church roll.8 This is surprising bearing in mind his contribution to Baptist life in London and his second wife being the daughter of a leading Baptist minister. 9 Burial in the Abbey suggests they had changed adherence. Unfortunately, their adjacent ledger stones in the south aisle provide no further clues as to any religious beliefs (Fig. 2). Barely legible now, the inscriptions just record their deaths in 1784 and 1789 respectively and little else. 10 Nonetheless the stones remind us of this important man who spent many productive years in St Albans. 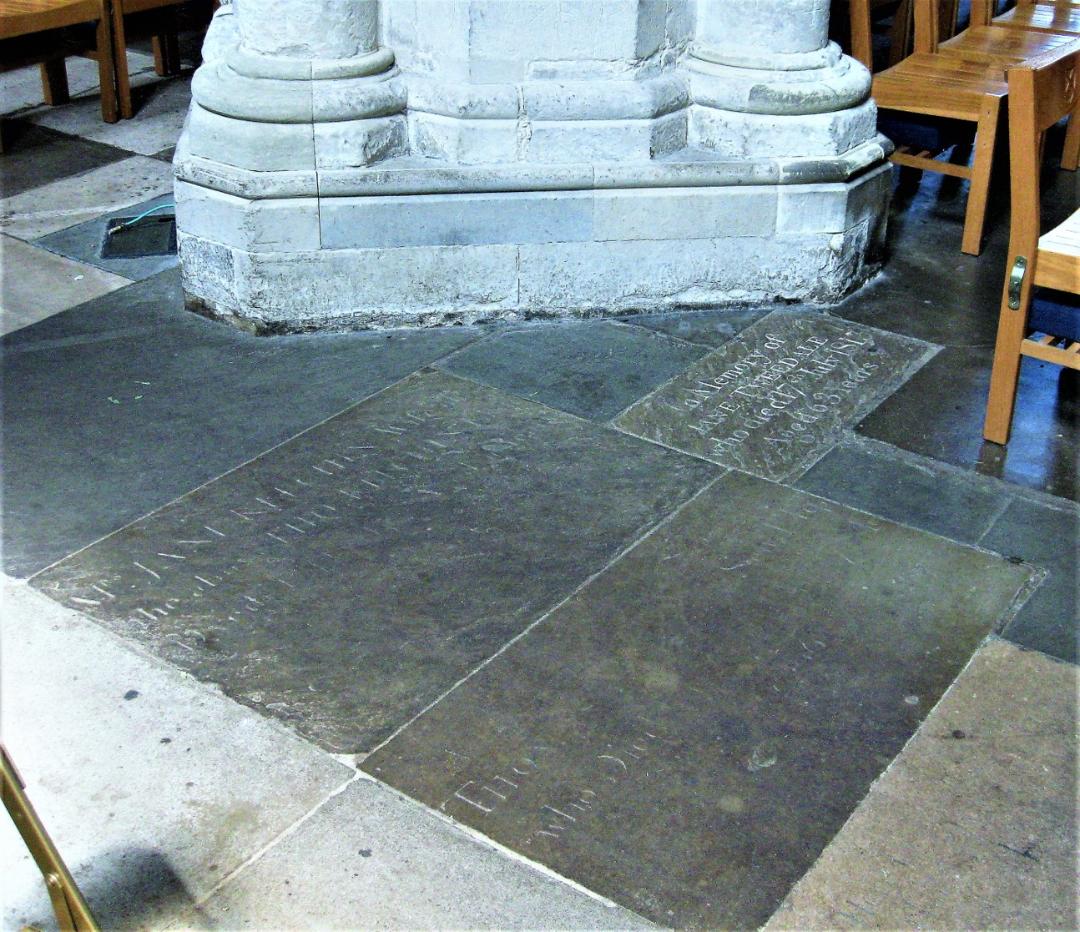 Our thanks to Laurence Worms for his help with this note and for permission to deposit copies of his articles in the Society’s Library. 11 This note was originally published in the Society’s November 2019 Newsletter.

1 The biographical information is extracted from two articles by Laurence Worms: ‘Thomas Kitchin’s “Journey of Life”: Hydrographer to George III, Mapmaker and Engraver’ in The Map Collector (issues. 62 and 63, 1993); and ‘Thomas Kitchin (1719-1784)’ in British Map Engravers: A Dictionary of Engravers, Lithographers and their Principal Employers to 1850 (2011).

3 We assume Worms calculated the location of Kitchin’s house from an analysis of the Abbey parish poor rate assessments for the period 1761-1795 (HALS, DP/90/11/4). This is a difficult source to interpret as it takes art as well as science. However, we do concur with his conclusion.

6 Current estimate by Jon Mein based on analysis of contemporary newspaper adverts for scheduled coach services and D. Gerhold, Carriers and Coachmasters: trade and travel before the turnpikes (2005).

9 Jane’s father was Joseph Burroughs, a prominent Baptist preacher. See his entry in the ODNB.

10 See K. Galpin, An Index of Gravestones and Memorial Slabs in the Floor of the Cathedral and Abbey Church of Saint Alban, (unpublished Ms, 1995; copy in SAHAAS Library), for details of the location of the stones and a transcription of the legible inscriptions.

11 These copy articles are currently in the ‘Thomas Kitchin’ file in the People’s Folders.