You are here: HomenextBuildingsnextSt Albans AbbeynextWilliam Longmire: the builder who links the Abbey, Prospect Road and Lincolns Inn

William Longmire: the builder who links the Abbey, Prospect Road and Lincolns Inn

The name of William Longmire is not too well known in St Albans history; indeed we know practically nothing about the early part of his career, apart from his being son of a Cumbrian farmer, then working as a carpenter in London. Yet in his last twenty years he built several stately homes in St Albans, and was entrusted with all the restoration work required for St Albans Abbey. He also gave St Albans a couple of puzzles.

From carpenter to renowned London architect

Longmire was born in 1812 in the tiny village of Ousby, near Penrith. We do not know when and where he trained to be a carpenter, but in 1841 we find him in Marylebone living, and presumably working, with a 65 year old carpenter named William Wright. Three years later he married the boss’s daughter Mary Ann, and he stayed living with the family until his wife had given birth to their first daughter. While his family was increasing to two sons and four daughters, he moved home twice, ending up in a house near Portman Square. From 1852 he was listed as a builder rather than a carpenter, and he had an architect living with him. From 1860 his firm was known as Longmire and Burge, and they had working premises in Osnaburgh Street, near Regents Park. It seems that he was doing pretty well.

William Longmire at work on the Abbey c.1882

We have not established what work he did in the next twenty years in London, but he was evidently establishing his reputation as a builder and restorer. In 1874 Sir Edmund Beckett, the future Lord Grimthorpe, commissioned Longmire to build him a new country house at Batchwood, St Albans.

Then in 1877 he was commissioned by Sir Giles Gilbert Scott to move the south wall of the Abbey transept into a vertical position, lifting the nave roof while he did it. He achieved this difficult job to everyone’s satisfaction. In 1879 Longmire obtained a contract to carry out all the “restoration” work planned by Grimthorpe, which was to prove literally a life time’s work. All of this has been reported elsewhere.

Longmire still had his house in London and his builders’ premises, and no doubt he needed a season ticket on the new rail line from Euston to St Albans, but that was not enough. He bought or built two or more adjacent houses in the new Prospect Road at the bottom of Holywell Hill {now numbered nos 23 and 25}, and they were also used by other employees who were working for the family firm. In his will, Longmire referred to no 25 as “Ousby Cottage”, the name which is still engraved on its front gate. From his bedroom windows there was a very clear view of the east end of the Abbey, and of his men working on it.

At least four members of his family worked for the family firm. It must have been a large organisation, as they had the capability of doing several jobs at once, both in St Albans and London. Examples of their work include Torrington Hall, a fine house in Holywell Hill intended for the retirement of John Chapple, Abbey Clerk of the Works. (Unfortunately he did not live long enough to enjoy it.) And St Albans did not have a proper post office until Longmire built one in London Road, which is now nos 36-38, and still inscribed “Longmire House.”

In 1887, William Longmire died at his Marylebone home, but his eldest child Elizabeth took over the firm, living at “Ousby”, and work at the Abbey continued without interruption until about 1893.

The ‘lost’ arch of Lincoln’s Inn

The gardens behind the Prospect Road houses run down to the river, and if anyone looked from the other side of the river, soon after 1883, they might have been surprised at No 25. A large detached stone arch had been erected overlooking the river.  As it is still there, we can report that it has a base about 9 feet by 7 feet, and height about 15 feet; made of fine white stone, it might weigh about 40 tons.

When a visit was made there some years ago, the present occupants of the house had no idea what it was. However, further research with the library staff of Lincoln’s Inn in London revealed that they had lost an arch and St Albans had one to spare. It appeared that in 1881 Longmire and Burge acquired a contract for work to enlarge Lincoln’s Inn Chapel, which had been built by Inigo Jones in 1623. The “architect” involved was Lord Grimthorpe! 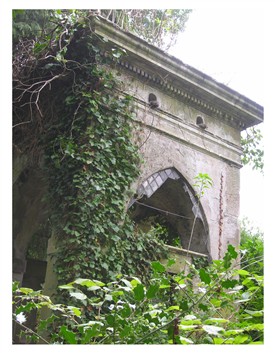 It appeared that the original entrance arch had to be removed, but before this was done two water colours of the arch were painted by John Crowther; they may be seen here and here. Ref 1 The problem of what to do with the old arch was solved by taking it to St Albans, presumably by train. Whether Longmire intended to keep it in his garden is not known; this is the first of the Longmire puzzles mentioned earlier.

During discussions about the arch, someone mentioned that there used to be some other stones erected in the garden of no 23, but they had fallen down after a thunderstorm in the 1960s. Then one of the Prospect Road residents managed to locate an old photograph in colour which had been taken from the window of no 27, by the lady who once lived there. This showed a large decorative window arch standing erect in no 23 garden.

Putting two and two together, and consulting Fig 44 in Eileen Robert’s book about the Abbey, it became clear that this must be the 13th century window frame which had provided daylight for the East End of the Abbey, and must have been removed by Longmire at the behest of Grimthorpe and replaced by a very close copy, as shown in Eileen Roberts’ photograph (Ref 2). She says in her book that this was probably the finest example of geometric tracery in the 13th century Abbey. The old arch frame was about 22 feet high, not the easiest of relic to keep standing erect in the open for seventy years or more. Grimthorpe did not usually replace anything old with an exact copy; this must be the second St Albans puzzle. 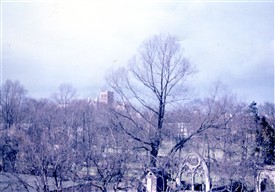 This story ends abruptly because of Longmire’s death in 1887, and we cannot be sure whether he was personally involved with the re-erection of the window frame. His eldest daughter Elizabeth, still unmarried, took charge of the firm Longmire and Burge, and saw the job through, living in “Ousby”, which had been left to her by her father. After she died in 1891, other family members lived there until 1910, then before long several of the houses in Prospect Road were combined to form an extended headquarters for the Herts Yeomanry Cavalry.

After the Abbey restoration programme concluded, some members of the Longmire family acquired land in a new development area near Sopwell Nunnery, to be called Priory Park. Some modest houses were built on each side of a new road, which in 1900 was given the name Longmire Road. As a boy, I thought the name referred to the quality of the then cul-de-sac, but I had a lot to learn.

While every reasonable attempt has been made to obtain permission to use the original photograph of the arch and window reproduced in this article, it has not been possible to trace or contact the copyright holder. There has been no intention of exploiting this image for economic gain. That said, if you are the owner of the copyright in the original photograph from which the copy contained here was taken, please contact the Society to establish retrospective permission.

We would be delighted to hear if you have a better view of the arch and window. Please contact the website editor if you can help.

Please note that the arch and the remains of the window are on private property.