You are here: HomenextSocial historynextWar and Conflict: their impact on St AlbansnextHertfordshire Scouts And The Great War

Hertfordshire Scouts And The Great War 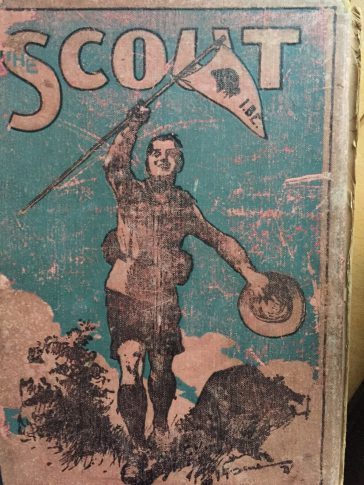 zoom
Front Cover of 'The Scout', bound copy of the weekly Scout magazine from 19 September 1917 to 10 August 1918.
Peter Bourton

With the centenary of WWI approaching Hertfordshire Scouts are keen to explore their involvement in the Home Front. As the Founder Baden-Powell was a former soldier and national hero, he could see war approaching. He organised his right hand man, Percy Everett the County Commissioner of Hertfordshire and Charles Dymoke Green the District Commissioner of St Albans to mobilise Scouting in the county in readiness.

Following the declaration, a meeting was held at Dursley, Avenue Road, St Albans and a few days later, every Scout in St Albans was ready to provide a round the clock service to the Army, Police, Fire, Ambulance, Council and other bodies. An office with a telephone was set up off Holywell Hill and a diary, log-book and other hand written material kept to record all work required and carried out. All these books are kept at the Hertfordshire Scouts County Archives and Heritage Centre at Well End Activity Campsite.

The County Commissioner of the Hertfordshire Scouts Association, Charles Dymoke Green had written to the Chief Constable and the organisation spread like wild-fire through the county and the UK. As most of the coastguards were commissioned to war service, all coast-watching duties were carried out by 8000 Sea Scouts during WWI including several from Hertfordshire.

It was quickly found that other organisations e.g. the Army cadets were unsuitable to undertake Home Front duties like guarding bridges, telephone lines and docks etc. as they were only trained to follow orders, whereas Scouts were trained to live in survival situations, and were also proficient in signalling, first aid, cooking and were able to use their own initiative.

Sounding the ‘All clear’

Because of their local knowledge, Scouts in WWI were also used to guide soldiers to billeting, deliver messages and sound the “All clear” on their bugles following an air raid. A whole chapter in The Times History of the First World War was devoted to the Scouts and included references to St Albans and Hertfordshire.

‘The Food Controller has asked the Scouts to give their help in catching rabbits in any part of the country where farmers want it. Our Scout Law says that a Scout does not wilfully kill any animal without good reason; even then he should give as little pain as possible. There is good reason just now for killing rabbits. They unfortunately do an immense amount of harm to the farmer’s crops; also they are very good food for the people. In this time of danger to the country, when the enemy are doing their best to starve us out by sinking all the ships that bring us food from overseas, the killing of rabbits is a valuable service to the nation. ‘ From ‘A Weekly Pow-wow by Sir Robert Baden-Powell KCB’, The Scout, March 9, 1918.