You are here: HomenextSocial historynextWar and Conflict: their impact on St AlbansnextThe Home Front in St Albans during the First World WarnextAppealing against Conscription, 1915-18 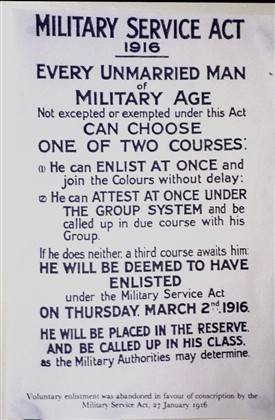 The Tribunal process in St Albans

Conscription was introduced by Act of Parliament in January 1916 as it became clear to the Government and military authorities that voluntary recruitment was not going to provide the numbers of men needed to prosecute the war.

Before conscription was enacted, efforts were made in 1915 to bolster numbers voluntarily through the Group Scheme, more commonly known as the Derby Scheme, introduced by Lord Derby, Director-General of Recruiting. Under this scheme men aged 18 to 40 could continue to enlist voluntarily or attest, making a commitment to join up if called upon to do so.

Whilst set up to manage appeals under the Derby Scheme, within months the responsibilities of local tribunals up and down the country increased substantially following the introduction of conscription. Under the auspices of the Local Government Board, local tribunals enabled individuals to make an application for exemption from conscription on grounds set out in the Military Service Act 1916, namely that:

A certificate of exemption could be conditional, temporary and, very rarely, absolute. A study of the 1,050 cases heard by the St Albans City Military Tribunal over the 1916-18 period indicates that a large number of cases were made by employers keen to retain key, skilled workers. In most of these cases temporary exemptions were given and some men appeared before the tribunal three times or more as their employers sought to extend their exemption from military service.

The tribunals were held in the Mayor’s Parlour in the Old Town Hall. Councillors Flint, Day and Lee served on the tribunal throughout the war and were joined by a number of other local men, including trades representatives. Representing the military at every hearing was Major Gape. The tribunal sat 105 times between November 1915 and October 1918 and made 2,192 decisions. Balancing the demands of the military authorities against the personal circumstances of individuals must have been a tough and thankless task for the local ‘great and good’ who served on the tribunal.

If you want to know more about the tribunal and the men who applied to it then have a look at the following documents. If you have any questions, do drop us an email to: homefront@stalbanshistory.org