Billeting, bills and brief goodbyes in the First World War 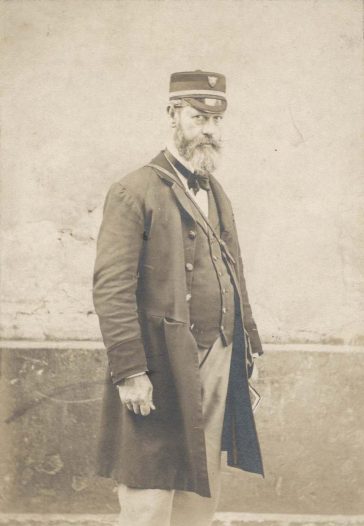 The storm clouds of war gathered so quickly in the summer of 1914 that Army reservists like Major E Montague Jones, headmaster of St Albans School, didn’t even have time to notify the school governors in person that he had been called up.

Instead, Montague Jones wrote a letter to the governors on 25 July 1914, ten days before war was officially declared, saying: “Owing to the war, I have been called upon to serve with the 1st Herts Regiment during embodiment, in consequence I have been obliged to make temporary arrangements for the carrying on of my work during this period.”

In the governors’ minute book it is noted that whilst regretting that it had not been possible under pressure of circumstances for the headmaster to give earlier intimation to the governors, they nevertheless expressed their cordial approval of the arrangements he had made.

Herts Advertiser editor Mr A. E. Gibbs (see photo) was also caught on the hop, stranded in Lyon in east-central France as hostilities commenced. In an article published in the Herts Advertiser on 8 August 1914 he recounted his adventures, with paper money suddenly becoming non-negotiable, the railway taken over by the French Government, a helpful British consul, innumerable stoppages and struggles for food at buffets denuded of almost everything edible. “Fortunately,” he wrote, “I had a few hundred francs in gold, more than enough to carry me through my subsequent adventures, in which respect I was very much more fortunate than many other people. Scores of travellers, especially Americans, were stranded for want of money although they were carrying drafts for large amounts, but which they were unable to cash.”

Also stranded, this side of the English Channel, was a German scoutmaster who was camping with scouts from St Albans when war was declared. According to Cecil Sharp, who was one of those scouts, he left immediately but only got as far as Dover where he was stopped and spent the war interned on the Isle of Man.

The young Cecil Sharp came back to St Albans to find various London regiments already billeted in the town. Our research indicates that there were as many as 8,000 soldiers stationed in St Albans during the First World War. Schools, halls and other public buildings were requisitioned to accommodate them as well as private homes.

Barbara Rapson, another local person whose memories of the period were recorded by the Museum of St Albans in the 1970s, recalls trenches being built on land opposite her home in Blenheim Road and also seeing soldiers doing bayonet practice on Bernards Heath although it was only later that she realised what the men were doing as they charged at hay-stuffed sacks hung on something resembling a large goalpost.

We know from letters sent by the town clerk that the 2nd London Irish Rifles were stationed in Clarence Park in August 1915.

2nd Lieut. Geoffrey S Williams wrote querying an account for water used at the park and the town clerk gave a breakdown of the £1-15s-0d bill as follows:

Later that month the officer commanding the 54th East Anglian Division, based at Donnington House in St Peter’s Street, was sent a £11-4s-6d bill for the use of the swimming baths in Victoria Street by the military between the months of May and July.

There are many accounts of bills sent by the town clerk for use of facilities and a number for the cost of repairing lampposts knocked over by military vehicles.

However, when the military tried to requisition the municipal horses the council were not prepared to play ball. “The exigencies of maintaining the city in a sanitary condition will not admit of their placing at the disposal of your unit [176th Brigade, 59th (North Mid) division] the six horses referred to in your letter,” wrote the town clerk. “The total number of horses belonging to the corporation is only 11 and the corporation are themselves having to hire horses at the present time to enable the essential work of the city to be carried out.”

This article was originally published in November 2013 in the Herts Advertiser newspaper in a series of articles contributed by SAHAAS members. We are grateful to the newspaper’s editor for his permission to republish the article here.

Be Proud: Hertfordshire and the Great War: an anthology, J.G.E. Cox, Eddington Press, (2002)