You are here: HomenextSocial historynextWar and Conflict: their impact on St AlbansnextThe Home Front in St Albans during the First World WarnextBirklands School in Wartime 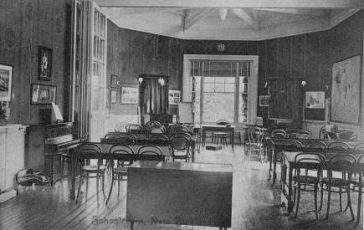 Birklands School Magazine paints an interesting picture of the perspectives of pupils at this boarding school at the edge of St Albans, through the development of the First World War.

The Editor of the Easter 1917 edition, Mabel Thatcher, commented “that ever since the War began, Birklands has in various ways tried to do its share of war work.” She describes production of knitted garments, shirts and many hundreds of sandbags for the troops- “fruit of many hours work, which otherwise would have been devoted to sport or more dainty needlework.” She commented that the best work of this sort and, by the greatest quantity, was done during the first year of the War.

But by 1917 there are tales of concerts and tea parties for wounded soldiers from the Napsbury Military Hospital, an unusual cricket match in which these soldiers worked hard at allowing the Girls to win and a French play staged to raise money for Christmas puddings for the Tommies. In Easter term 1917, Birklands added to the familiar pattern of providing a “Great Potato Patch”, described as digging towards National Service.

From a different perspective, when Birklands established its own War Savings Association in 1918, a speaker from the Central War Saving Association showed slides to the Girls on the extraordinary rapid development of flying and the reported reaction was: “few of us had realised how very new this science (or art?) is.”

Copies of the school’s magazines are held at the Imperial War Museum (cat. ref. E.J. 1106)