Every Penny Counted in the First World War 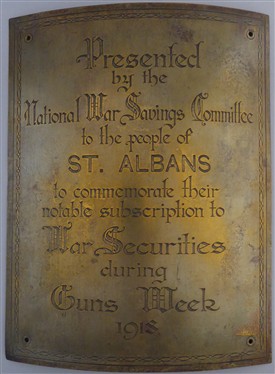 zoom
This brass plaque was presented to the people of St Albans in recognition of the huge sum of over £100,000 raised during Guns Week in 1918.
St Albans Museums

The contribution of St Albans to the war savings movement

In the summer of 1916, shortly before the Battle of the Somme, the people of St Albans were called upon to start saving money for the war effort on an unprecedented scale.

The call came from the National War Savings Committee, set up in April 1916 to help finance the rising cost of the First World War, which was said to be approaching £5m a day. The findings come from a new book published by this Society about the city during this period called St Albans: Life on the Home Front, 1914-1918.

The committee launched a huge propaganda campaign, promoting government war loans and a savings certificate scheme to all sectors of society, from traditional investors to ordinary working people with very little money to spare. The committee devised special marketing campaigns, characterised by friendly contests, prizes and quotas. They also encouraged the establishment of local war savings associations to promote the purchase of certificates.

Savings certificates went on sale in June 1916. A £1 certificate could be bought for 15s 6d, offering a return of 29 per cent over five years. Those unable to muster such a sum could buy 6d coupons or stamps to put towards purchasing certificates.

The campaign in St Albans got off to a very slow start. In October 1916, Albert Garrett, honorary secretary of the city’s central war savings committee, told Mayor James Flint that St Albans had only raised £2,500 so far and at two shillings a head that figure was well below the national savings average.

By February 1917, the situation had improved dramatically. The city had raised £275,000 in its first ‘Victory Loan’ campaign  – around £11 per head. The council actively supported the campaign: a letter from the mayor was delivered to every home and Albert Garrett and his wife Edith were appointed ‘to interest every citizen in the New Loan’. Full details of how to invest appeared in the Herts Advertiser. On 24 February 1917 the newspaper carried stories of one bank having taken ‘quite a thousand pounds of gold’ and of people bringing ‘their little hoards of gold’ to the post office. The editor remarked that almost everybody had ‘done their bit’.

A further campaign, dubbed Businessmen’s Week, followed in March 1918, when the inhabitants of the city were treated to the novel sight of aeroplanes flying low over the rooftops, scattering savings leaflets wherever people congregated. In December 1918, Guns Week (renamed Thanksgiving week after the Armistice) exceeded its target of £100,000 and the city was given a brass plaque to mark this achievement (see photo). The most successful campaign came in July 1919, when Victory Loan Week raised £332,649, of which £100,000 came from Jack Joel, the mining magnate who lived at nearby Childwickbury.

Local people took to the idea of savings certificates. These were sold mainly through the local war savings associations, which encouraged regular saving, for example by house-to-house collections. Almost any organisation could set up an association, no matter how small. Participants included St Saviour’s church, the public library and the wards of the city. Altogether, 34 associations were set up in the St Albans area with over 4,700 members (nearly 20 per cent of the population). Savers came from all walks of life including many schoolchildren, with one school boasting that ‘every child in the school is a war saver’.

By the end of 1919, St Albans had raised close to £900,000, of which over £100,000 was in certificates. This was achieved not just by large investments by the wealthy, but also by the regular saving of sixpences and shillings by ordinary working people who had been willing to lend their money to support the war effort. They must have been astonished at their achievement.

This article was originally published in September 2016 in the Herts Advertiser newspaper in a series of articles contributed by members of the SAHAAS Home Front research group. We are grateful to the newspaper’s editor for his permission to republish it here.