You are here: HomenextSocial historynextWar and Conflict: their impact on St AlbansnextThe Home Front in St Albans during the First World WarnextFeeding the city 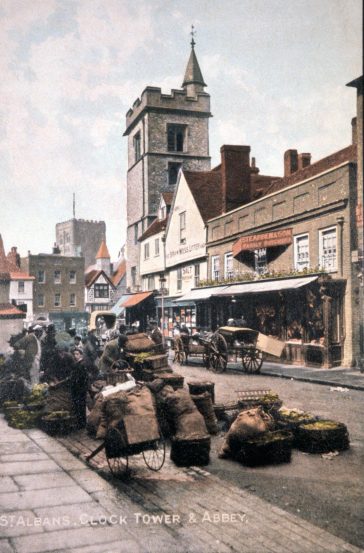 At the start of the First World War, Britain imported over 60 per cent of its total food supply, with only one loaf in five baked using home-grown wheat.

This clearly had implications for any conflict which might disrupt international trade routes, and when such a conflict became a reality in August 1914 men and women across the country took action to protect their own food chains, emptying shops and filling larders as much as their purse would allow.

The laws of supply and demand being what they were and are, wholesalers and retailers responded with higher prices. Whilst there were no reports of food riots in St Albans as were to be found in other parts of the country, an editorial in the Herts Advertiser of 15th August 1914 noted a return to more normal trading conditions after the ‘scares’ of the previous week together with a disapproving comment that ‘dustbins were being cleaned and kitted out as storage bins for flour at a few – it is to be hoped a very few – St Albans homes’.

The implication was very much that food shortages were an artificially created problem made by irresponsible people, although the housewife with a family to feed may have thought she was being prudent rather than irresponsible.

Prices of such staples as flour and sugar were quick to rise and by the end of August the price of a loaf had risen by ½d to 4d (d = old pence); by the following April the cost had doubled to 8d with rumours that it was about to increase by a further 1d a loaf.

One particular area of concern was around the quality of milk; the watering down of milk to make supplies go that bit further was a recurring complaint from consumers. In September 1914 the City Council passed a resolution that milk vendors whose product was shown to be compliant with standards of quality and fat content might publicise this fact; clearly this was meant as a way of raising standards and reassuring the public that their milk was safe, whilst sending a message that the Council was in control of the situation.

That first Christmas of the war saw producers and retailers promote a message of ‘Business as Usual’, with reporting in the Herts Advertiser emphasising the need to celebrate as usual for the sake of the children and crucially the many businesses which were dependent on the income from their Christmas trade.

The International Stores advertised a wide range of goods as available including tea in fancy tins, iced biscuits, bottled and tinned fruits, although again prices had risen. W. Bugler & Sons of Market Place urged customers to send a plum pudding to their loved ones at the Front at only 2s 3d.

News from the butchers was that whilst supplies were good, the price of beef, veal, pork and turkeys was likely to be very expensive. Higher prices would, of course, have hit everybody and there were probably some for whom the usual Christmas beef might be replaced with a piece of mutton.

In the face of shortages and rising prices, the message which was promoted by the authorities via the Herts Advertiser was one of household economy, with the good women of St Albans bombarded by articles on how to avoid waste and make best use of those provisions which were still available; these included the fortuitous discovery that in fact too much meat was bad for the digestion, herrings (which were plentiful in 1914) were a versatile and healthy meal, and that tea (which by Christmas 1914 carried a war duty of 3d a lb [pound weight]) was not good for the nerves.

Behind these rather patronising attempts to teach the women of St Albans how to cook and save money was a very real fear that problems around food might be a weak link in the war effort.

In those first months of the war, availability was less of an issue than price. As fighting continued into 1915 and beyond, growing calls for rationing reflected a sense that whilst men of all classes were fighting and dying together, back home their womenfolk were still divided by their ability to pay higher prices or even spare servants to join the long queues for the decreasing number of foodstuffs on sale. However, it was not until 1918 that sugar became the first item to be rationed and until then coping in the face of shortages and high prices was the order of the day.

This article was originally published in November 2014 in the Herts Advertiser newspaper in a series of articles contributed by members of the SAHAAS Home Front research group. We are grateful to the newspaper’s editor for his permission to republish it here.