You are here: HomenextSocial historynextWar and Conflict: their impact on St AlbansnextThe Home Front in St Albans during the First World WarnextHome Front Guardians 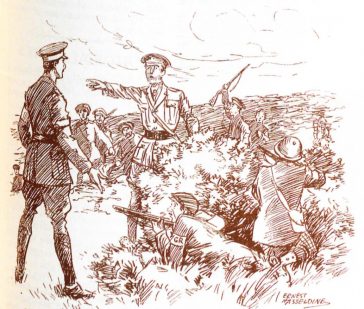 zoom
Captured by artist Ernest Hasseldine, men from the 'Dad's Army' of the First World War on manoeuvres at Nomansland Common in 1915
British Library

Imagine you are reading a copy of the Herts Advertiser published just over one hundred years ago in November 1914. Inside you would find a letter to the editor from local solicitor Thomas Ottaway announcing a public meeting to set up a Volunteer Training Corps in St Albans.

This organisation was for men who wanted to do their ‘patriotic bit’ but who were too old for the Army or Territorial Force, medically unfit, or who had a “genuine reason” for not leaving their family or business.

With hindsight we can see that the Volunteer Training Corps (VTC) was an obvious forerunner of the Home Guard, established in the Second World War. However, there were big differences. While in 1940 the Government set up the Home Guard (or Dad’s Army) and paid for uniforms and weapons, the VTCs in 1914/15 were set up spontaneously by the public and the members themselves had to fund their own clothing and rifles.

In the early years of the First World War the Government was not keen on the VTC; it really wanted men to join the armed forces and serve abroad, not stay at home and ‘play’ at soldiers.

Undeterred, hundreds of men flocked to the meeting in the Town Hall and joined the VTC. They wanted to learn how to march, fire a rifle and defend St Albans in the event of an invasion. Not only would they be seen to be serving their country, but they could do this while living at home. One wonders in retrospect whether they also wanted to wear a uniform, enjoy exercise outdoors and get away from their families for a day or two.

Not that they had uniforms at first. Pictures from the early years of the war are of volunteers in their cloth caps and everyday clothes; practicing drill in the hall at St Albans School, fighting mock battles on Nomansland Common at Wheathampstead or going on route marches to Hatfield. In the lighter evenings they paraded in Clarence Park. To show they were authorised combatants they had to wear a red armband when training, emblazoned with the initials G.R., which stood for Georgius Rex, or George V. Bystanders joked that this stood for Gorgeous Wrecks, Germany’s Ruin or Grandfathers Rejuvenated. Some of the men were indeed elderly. The first commanding officer of the St Albans unit was 79 year-old Lt Col Rumball.

The War Office wouldn’t allow the VTC to resemble real soldiers, so the volunteers had to buy obsolete rifles and uniforms in grey-green material. They found themselves things to do such as guarding munitions factories, railway lines and a nearby anti-aircraft gun. Later they dug trenches in the park at Hatfield House where the newly designed tank was to be tested, and they guarded a night landing strip for the Royal Flying Corps. A medical sub-unit helped convey wounded Frontline soldiers from the train halt at Napsbury to the military hospital nearby.

As the manpower shortage became critical, the Government turned to the VTC movement with greater interest. From March 1916 conscription was in force but local Military Service Tribunals  could attach a condition to exemptions from conscription that men should join the VTC. The Government also funded khaki uniforms, rifles and more professional military training to encourage men to commit to stay in the VTC until the end of the war.

Inevitably the VTC came to consist of keen older men who were perhaps not fighting fit, and unenthusiastic younger men who had been sent by the local tribunal. Some young men even argued against joining the VTC. One such was 38 year-old A.E. Ranger, a married man living in New England Street who worked in the road haulage business until midnight six days a week. He claimed it was unreasonable to be asked to parade with the VTC on a Sunday.

While they may have been an efficient and trained body of men, releasing Regular soldiers for service abroad and training younger men for eventual service in the Forces, the volunteers’ sphere of usefulness was for the most part restricted to St Albans.

Following the Armistice, the VTC was no longer needed; equipment and uniforms were returned and funds disposed of. But in 1940 when invasion again threatened the country, the lessons learned from the VTC days were remembered and the Home Guard, with the Government’s backing this time, set off on a more effective and purposeful path.

This article was originally published in December 2014 in the Herts Advertiser newspaper in a series of articles contributed by members of the SAHAAS Home Front Research Group. We are grateful to the newspaper’s editor for his permission to republish the article here.