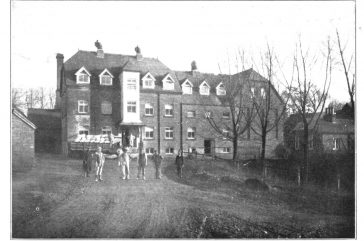 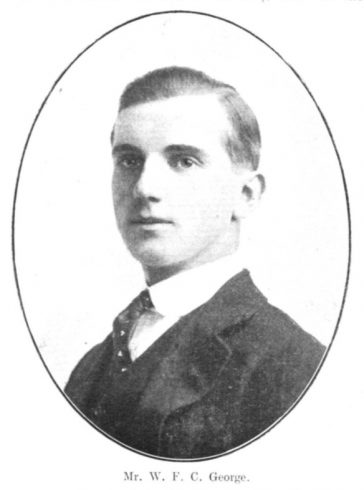 Historically there were many mills along the length of the Ver valley which runs from just north of Markyate at Kensworth to Bricket Wood where it joins the River Colne. Several were owned by St Albans Abbey until they were sold off in the mid-16th century at the dissolution of the monasteries.

New Barnes Mill (see Fig. 1) was part of the Gorhambury estate owned in 1914 by the 3rd Earl of Verulam, James Grimston (1853-1924) and managed by Walter George. Milling here was on a considerable scale, the mill having recently undergone significant modernisation. In 1898 the Earl commissioned a report on the viability of a new modern mill with steam engines and rollers rather than water wheel and grindstones. The favourable findings noted that there was a good supply of local wheat requiring the addition of no more than 33 per cent of ‘strong foreign wheat’ and no significant competitor within a six-mile radius of St Albans and Harpenden.

A journalist from the Milling journal visited New Barnes Mill late in 1914. His resulting informative but effusive article may well have been written in contemplation of a pleasant lunch at the Peahen in St Albans. Apart from one reference to ‘these strenuous times’, there is no mention of the war itself. This is surprising as millers were indeed facing strenuous times, particularly how to maintain a consistent supply of quality product with diminishing manpower and wheat.

By 1914 only one loaf in five was made from home-grown wheat as the ‘strong foreign wheat’ produced a whiter, lighter loaf popular with consumers but, due to increasing German naval activity, imports were under threat. In August 1914, national wheat stocks amounted to seventeen weeks; by early 1917 they were at just thirteen weeks. Bread, unlike sugar and meat, was never rationed amid concerns about social unrest, bread being the staple diet of many.

However, waste was actively discouraged. Instructions in the form of Manufacture of Flour and Bread Orders proliferated. These required, for example, millers to increase the flour extracted from wheat from 76 per cent to 81 per cent and to add not less than 5 per cent of flour from maize, rice, barley, oats, semolina rye and bean. Potato flour was also used to the extent of 15lbs per each 280lb sack of flour. ‘Government Regulation Flour’ was deemed by the government to be ‘palatable and nutritious with no objectionable characteristics of any kind’. This was not always the view of the local population and in November 1917 George required an expert to examine the supply of grain as there was some doubt that it was fit for human consumption.

In July 1917 the government decided to take over direct management of all corn mills. A stock-take undertaken in September 1917 showed that the mill was supplying 12 per cent of the city bakers’ requirements with Brown Bros of Luton and Toovey’s of Abbots Langley producing similar quantities. They were all dwarfed by the Co-op at 45 per cent.

Coping with the call up of skilled staff

The significant challenge during the war was to keep hold of skilled staff especially with the introduction of conscription (enforced enlistment) in March 1916. Being a ‘controlled establishment’ would hopefully reduce this likelihood. In June 1916 Walter George (see Fig. 2) and Lord Verulam reported to the local Military Service Tribunal since August 1914 sixteen of their original twenty staff had left to join the services. They had been successful in recruiting another ten men to make fourteen in total but now had to face the problem that ten of these were of military age and had received their call-up papers. All employers, not just millers, faced similar problems.

The Military Service Tribunal system was a safety valve. Any man, or his employer, could apply to it for temporary conditional or permanent exemption from conscription. For those living in St Albans this was the City Tribunal which met at the Town Hall. George applied successfully for repeated temporary exemptions for most of his men on the grounds that it was in the national interest that his men carried on working for him rather than being called into the army. In all, the tribunal heard 32 applications for exemption from the mill between 1916 and 1918 on behalf of 14 employees. George also took the important step of advertising in the Herts Advertiser for a ‘few strong women’ to work at the mill for good wages. His report to the tribunal in December 1916 that he had successfully recruited seven women would have been well received at a time when the tribunal was trying to encourage the introduction of women into industrial production.

The increasingly parlous state of the city and the country’s food supply would have been a key consideration in the tribunal’s deliberations as George could justifiably say that his staff were working in the national interest, providing food for 30,000 people. George’s was an enviable record, only losing two men at the hands of the tribunal. Other employers in St Albans weren’t so lucky, particularly the printing companies who found fractious relations with trade unions preventing them from training women to take on skilled roles vacated by men lost to the army through the tribunal.

After 1923 the mill was leased by the Gorhambury estate to Whitworth Brothers, another firm of millers, and subsequently used as a testing station by British Flour Research Committee and a delivery depot for Weetabix. They then assigned it to the Co-operative Society in October 1929. It was converted to office suites in the late 1950s.

See the Society’s publication, St Albans: Life on the Home Front, 1914-1918, for more about life in the city during the First World War and Wind, Water and Steam (2016) by Hugh Howes for general information on Hertfordshire milling.

Val Argue was a member of the Society’s Home Front Research Group. This article was originally published in the Autumn 2016 journal of the Park Street and Frogmore Society. Many thanks to the journal’s editor, Jacqui Banfield-Taylor, for her permission to post the article here.