You are here: HomenextSocial historynextWar and Conflict: their impact on St AlbansnextThe Home Front in St Albans during the First World WarnextSoldiers Under Foot 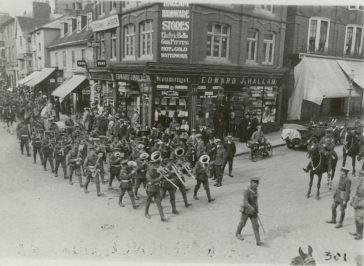 Billeting the 7000 soldiers who descended on St Albans in 1914

Under the Defence of the Realm Act passed in the UK on 8 August 1914 the government had the power to requisition buildings or land deemed necessary for the war effort. This included commandeering rooms in private homes for the purpose of billeting soldiers.

The billeting officers swung into action as thousands of new recruits headed for training camps around the country. In a memoir* written by Rifleman Patrick MacGill in 1915 he recalled his experience of being billeted in St Albans: “It was not until we were unceremoniously dumped amidst the peaceful inhabitants of a city that slumbers in the shadow of an ancient cathedral that I felt I was in reality a soldier. Here we were to learn that there is no novelty so great for the newly enlisted soldier as that of being billeted, in the process of which he finds himself left upon an unfamiliar door-step like somebody else’s washing.

“He is the instrument by which the War Office disproves that ‘an Englishman’s home is his castle.’ He has the law behind him; but nothing else – save his own capacity for making friends with his victims.”

Bernard Smith, a boy of 13 living in Boundary Road when war broke out, recalled the billeting officers’ visit: “They asked how many people lived in the house and there was only my mother and father and myself and they said ‘well you can easily accommodate two soldiers’. There was no question of ‘will you?’, it was obligatory.”**

Even spots where local bands played were not sacrosanct. On the 22nd August 1914 the town clerk was forced to write to the St Albans City Silver Prize Band and the St Albans Military Band to advise them, at very short notice, that they had been out-placed by the army: “I am directed to inform you that a band attached to the military at present stationed in St Albans will be playing at the Clarence Park bandstand tomorrow (Sunday) afternoon from 3pm to 4 o’clock and also on the Market Square at 8pm. Consequently it will not be practicable for your band to play at either of these times.”

Many schools were still occupied in September 1914 when children were due to start the autumn term, including St Albans High School for Girls in Townsend Avenue, which had been taken over by the 2nd London Irish Rifles, Rifleman MacGill’s battalion.

Several of the soldiers billeted in the schoolroom of Dagnall Street Baptist Church were “feeling somewhat acutely the effects of inoculation” reported the Herts Advertiser in October 1914, and in such a condition had not found the floor the most comfortable sleeping place. “Out of compassion for these good fellows, Miss Laura Gibbs has set to work and with considerable ingenuity has manufactured for them mattresses and pillows of the paper shavings from the works of Messrs Gibbs and Bamforth [publishers of the Herts Advertiser], using unbleached calico for the covers,” stated the paper. “Ten such beds have been made up to the present and the soldiers are full of gratitude for this act of kindly consideration.”

For the poorer, hard-working families the inconvenience of accommodating soldiers was probably offset by the benefit of receiving payment for housing and feeding them.

Households were paid three shillings a day to accommodate an officer who had to pay for food separately. Payment to provide a home for other ranks was a similar amount but included payment for cooking three meals a day from the soldier’s ration, which was delivered by the ration fatigue in a wheelbarrow piled with fresh meat, bread, potatoes, sugar, tea, cheese and tins of jam.

This article was originally published in August 2014 in the Herts Advertiser newspaper in a series of articles contributed by members of the SAHAAS Home Front research group. We are grateful to the newspaper’s editor for his permission to republish it here.

* The Amateur Army by Patrick MacGill. Available online as a Project Gutenberg EBook #16078

** My St Albans Memories, Collected for the Museum of St Albans by David Broom, Assistant Keeper of Social History (2001)