You are here: HomenextSocial historynextWar and Conflict: their impact on St AlbansnextThe Home Front in St Albans during the First World WarnextSt Albans: Life on the Home Front, 1914-1918 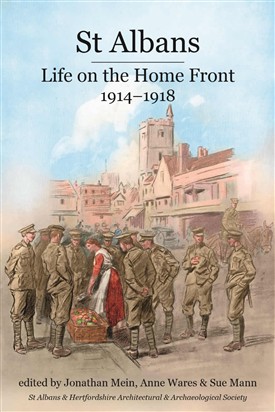 The Society’s new book, researched and written by twenty-one of its members, was published by Hertfordshire Publications on 1 September 2016. It is available to buy in St Albans at Waterstones and the bookshop in the Cathedral. Copies can also be purchased on leading websites such as Amazon.co.uk, Waterstones and W.H. Smith’s. E-publication editions can be downloaded from some of these sites.

Here are details of the book:

Much has been written about the men who left to fight in the First World War but what was life really like for those left behind on the Home Front? A bustling market town profoundly touched by the war, St Albans is the perfect place of which to ask this question, thanks in part to the survival of exceptionally rich archives of records from the period.

In 1914 St Albans had a population of over 24,000 people. Within days of the outbreak of war, with all the emotion and upheaval that entailed, the town also had to adjust to the arrival of more than 7,000 soldiers for whom billets needed to be found. This book considers the social changes that took place as St Albans became a garrison town for the first time in centuries.

In the early decades of the twentieth century St Albans had a diverse economy. Along with the established straw-hat-making factories and silk mills, other light industry had been introduced more recently, notably printing and clothing manufacture. There was contrasting prosperity and poverty, with slum housing conditions for many of the workers. As taxes increased and the Army ceaselessly looked to recruit more men, every enterprise fought to survive. The registers and minutes of the St Albans Military Service Tribunal, which, unusually, were not destroyed after the war, allowed the authors to explore the conflicting needs of the military and local businesses. From early 1916, the Tribunal heard applications from 1,050 men for exemption from conscription, including 23 conscientious objectors.

As the war went on, maintaining a regular and constant supply of food for the nation became ever more challenging. Shortages and complaints about unfair distribution led to the introduction of rationing in 1918 and queues became a daily fact of life.

Reviews – here are extracts from four reviews of our book:

“This book is full of fascinating and unexpected detail showing how all levels of society either fought against or adapted to the impact of war… There is so much to admire in this book, not least in the amassing of so much enthralling detail to tell a comprehensive story of four years’ concentrated social change. Local historians wishing to tell the story of their area in wartime will be inspired. The team of twenty-one researchers is to be congratulated on its impressive achievement.” –Ruth Jeavons, Herts Past & Present

“An exceptional book which will appeal to historians of the locality and the war.” –Jane Tunesi, Hertfordshire People

“This book is an exemplary local history of the Home Front of 1914-1918.” –Sally Sokolov, The Local Historian

“An excellent and illuminating panorama of St Albans from 1914 to 1918 … this book deserves to stand out from the sheer number of books published since 2014 on individual towns and cities across the British Isles during the First World War.” –Richard Batten, International Journal of Regional and Local History

If you have any enquiries about the book, please email homefront@stalbanshistory.org

For further details about our Home Front Project click here.