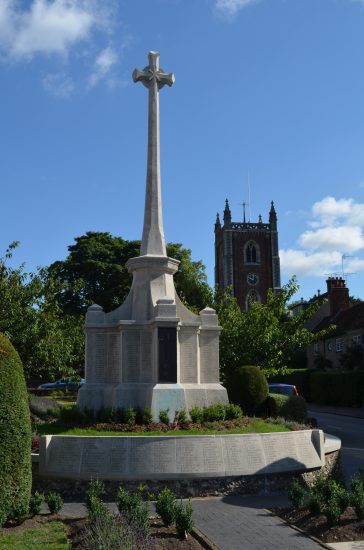 As part of our project researching the Home Front in St Albans during the First World War, members of the SAHAAS research group have discovered that there are 40 memorials in the city to local men who lost their lives in the war. Most obvious of these are the City Memorial on St Peters Green and the unique collection of ten memorials in the streets around the Abbey. Others are easily missed. How many customers of NatWest Bank in St Peters Street realise that they pass within three feet of a memorial every time they enter the bank?

The city’s memorials take many forms. Amongst them there is a memorial hall in Branch Road, a window in the Abbey and another in the former chapel at St Albans Hospital, two tablets outside old factory premises near the City station, a roll of honour in the Civic Centre and of course a tree in Waxhouse Gate.

In 2013 the Group published two documents relating to the memorials. These are the War Memorials Leaflet described below and also the War Memorials Matrix (see below), both of which can be viewed online or downloaded.

This leaflet, revised in August 2018, describes the location and brief history of many of the memorials in the city centre. In taking time to see some of these, visitors may wish to consider not just the names that appear on them and the context in which the men died but also the emotions and aspirations of those who remained behind.