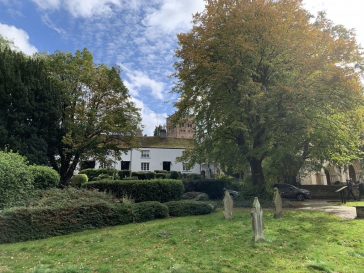 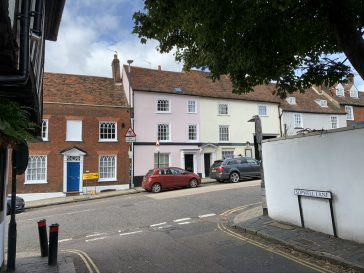 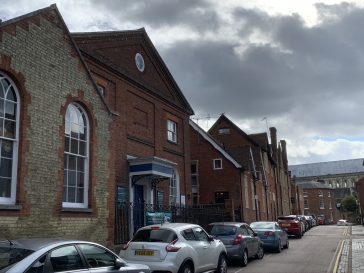 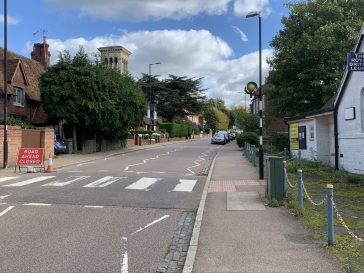 Commemorating the Battle of Alma (20th September 1854) in the Crimean War. The local regiment, [the 49th (Princess Charlotte of Wales) (Hertfordshire) Regiment] fought in the battle. The ‘Cut’ refers to a narrow cutting, joining one street to another.

College Street dates from 1826/27. It takes its name from buildings on Lower Dagnall Street, which in the 18th century had been the Collegium Insanorum of Dr Nathaniel Cotton, a pioneering mental health home. The buildings were demolished to make way for the road.

This takes its name from the cattle drovers who brought cattle to the market. Between 1926-71 the market stood on the site now occupied by the multi-story car park. Before 1926 the cattle market was situated in front of the Town Hall (now the Museum + Art Gallery).

In medieval times, this street skirted the north eastern side of the Abbey grounds. Alongside the street lay the fish ponds that the Abbey created to provide a ready supply of fresh fish. The street lay on the main route from the town to north west England, and several coaching inns were located there.

Named after Hall Place, a medieval manor house which stood in the vicinity. In the past it was claimed that King Henry Vl rested there during the First Battle of St Albans. This is now disputed. The house was knocked down in the early 1900s.

Called Halliwell Street in medieval times. Takes its name from the proximity of a holy well which was supposed to mark the spot where St Alban’s severed head came to rest after rolling down the hill. Abbot Ulsinus (Wulsin) is said to have diverted Watling Street in the ninth or tenth century, forcing all through traffic along the hill, thus enabling the Abbey to levy tolls.

The original road from London to the North West via St Albans passed along Sopwell Lane. In 1796 Thomas Telford constructed a new London Road, removing the need for traffic to come up the steep Holywell Hill. As a result, many of the coaching inns along the Old London Road and Holywell Hill lost much of their trade.

Takes its name from the Dukes of Marlborough. The 1st Duke of Marlborough was a famous general in the wars against France at the beginning of the 18th Century. He and his wife, the redoubtable Sarah Spencer, had their favourite home in St Albans and built almshouses for the poor.

The name of the shopping centre commemorates the brewery activities on the site dating back to at least 1776. The last brewery on the site, Adey & White’s, closed in 1936.

Romeland is a corruption of the name ‘Roomland’ or ‘open space’ where medieval fairs were held, and where George Tankerfield was burnt at the stake in 1555 in the reign of Queen Mary l.  It was eventually used as a supplementary graveyard.

Travellers from both Sopwell, where there was a nunnery in medieval times, as well as those from London, would enter St Albans via this road. Coaches had to mark a sharp right hand turn on Holywell Hill, but the need for this was removed when the new London Road was opened in 1796.

Named after the important Spencer family who were very influential in the town. The street was cut through the garden of one of their houses which is now a shop on St Peter’s Street.

Believed to derive from the medieval French word for grocers – épicier.  The street later became the home of one of the most historically important ‘independent’ or Dissenting churches in St Albans, catering for local Congregationalists, including the well-known Samuel Ryder.

‘Sumpter’ is an old name for a packhorse. These beasts of burden were widely used to transport goods until toll roads (turnpikes) improved road conditions and made it more practicable to use carts. Sumpter Yard is believed to have been the tradesmen’s entrance to the Abbey.

Named after the important local family, the Grimstons, who were Earls of Verulam. The road was ‘cut’ by the renowned Scottish engineer Thomas Telford in 1826, to help speed up the journey from London to Holyhead in North Wales. As a result, coach traffic moved away from Fishpool Street, drastically reducing the business of coaching inns there.