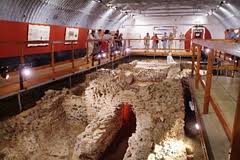 The Welwyn Archaeological Society is a friendly group of people, including amateur and professional archaeologists, united in their passion for exploring the past. New members are always welcome.

Dr Tony Rook founded the organisation in 1960 after discovering the Dicket Mead Roman Villa and successfully preserved the remains of the villas Roman baths in a steel vault 30ft under the A1(M) motorway in Welwyn, Hertfordshire. Since then the society has continued as an active archaeological society, working on a variety of sites in the area.

The current director is Dr Kris Lockyear, Senior Lecturer at University College London. The society holds a series of lectures from September – April and publishes three newsletters a year detailing the societies current research and news and organises at least one coach outing a year.
To find out more, visit the Society’s website.