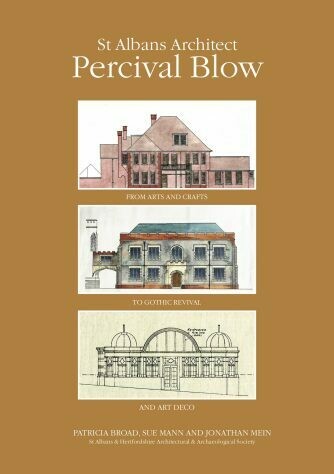 By Patricia Broad, Sue Mann and Jonathan Mein. This fully illustrated book tells the story of a very gifted man with a passion for good design. After a career spanning just over 40 years Percival Blow’s architectural work has left a lasting legacy in St Albans.

In 1898 at the age of 25 Percival Blow launched his professional career as an architect, having gained Associate Membership of the Royal Institute of British Architects (RIBA). He based his practice in his home city of St Albans, opening additional offices in Harpenden and Luton as work commissions dictated. Whilst the majority of his projects were in Hertfordshire and to a lesser extent Bedfordshire, his work in the First World War and later for Sainsbury’s took him much further afield.

He is particularly noted for the attractive Edwardian villas he designed in Clarence Road and Hall Place Gardens in St Albans and in ‘The Avenues’ area of Harpenden. The years of the First World War, the subsequent depression and a recession in the early 30s, all had an impact on the building industry but Blow weathered the lean years through his reputation, good connections and versatility.

The core of the book focuses on the different types of building that Percival Blow designed. It also reveals his huge commitment to the architectural profession through his close involvement with the RIBA.

The book includes original plans and drawings, sketches and early and more recent photographs. It contains a complete list of Blow’s known works with maps showing the location of his buildings in St Albans and Harpenden. For an expanded version of this ‘List of Works’ see the file attached below.

Members of SAHAAS carried out the research for this book, with the support of Percival Blow’s grandson, Christopher Blow. It tells the story of one very gifted man with a passion for good design, a meticulous approach to specifying the best possible building materials and a true appreciation of architectural history.