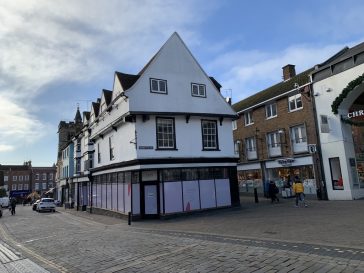 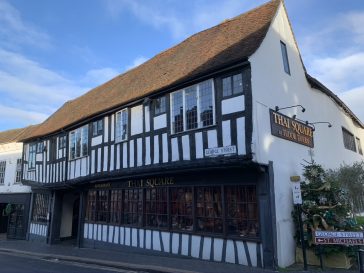 The Society has been active in support of the protection and restoration of the historic buildings of St Albans since its earliest days, as its Transactions record.

For example, in 1899, a prominent Society member, Frederick Kitton, started a petition to oppose plans by Boots the Cash Chemists, the then owner of The Gables (13-15 Market Place) [1] and replace it with a modern building. The attic story is jettied, and on one of the curved brackets supporting it is carved the date 1637 [2].

Fortunately, the petition attracted sufficient support to bring it to the notice of Jesse Boots, who committed to retaining the building. So it was that, at the annual meeting of the Society in County Museum at Hertford on 6 April 1900, a unanimous resolution was passed:

That the members of the St. Albans and Hertfordshire Architectural and Archaeological Society desire to express their satisfaction at the way in which the house on the south side of the Market Place, St. Albans, has been treated, and beg to thank Messrs. Boot very heartily for their consideration of the wishes of the Society [3].

The Society continued to keep a close eye on the way in which historic buildings were repaired, recording their appreciation at a meeting on 31 October 1902 for the sympathetic restoration of the moulded plasterwork on the façade of the Old House, No. 13, Fishpool Street, as well as the preservation of the ‘Ancient Buildings’ (now known as ‘Thai Square at Tudor Tavern’) at the upper corner of George Steet, and the exposure of the timber framing, hitherto obscured. [4].

Occasionally, the Society contributed to the restoration of historic features, such as work carried out on the Abbey Gateway in 1903 [5], on the Bacon Memorial in 1924 [6], and a Norman window in St Stephen’s Church in 1934 [7].

By 1912, the objects of the Society had been amended to a requirement ‘to oppose and prevent, as far as may be practicable , the execution of any injuries with which ancient buildings and monuments of every description, within the County , may be from time to time threatened, and … to collect accurate drawings, plans, and descriptions of any ancient monument which appears from any cause to be in danger’ [8].

The work of supporting the protection and sympathetic restoration of historic structures has continued, often in conjunction with other interested bodies, such as the Civic Society. Naturally enough, these efforts have not always been attended with success. But they’ve almost certainly helped to ensure that the importance to St Albans of its built heritage is not taken for granted by residents, developers or planners.