The rise and fall of Thomas Littlejohn Brash 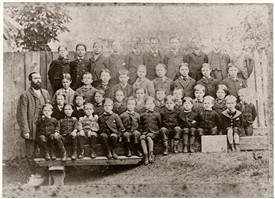 Thomas Littlejohn Brash was master of the St Albans British School, Spencer Street, then the Hatfield Road Board School from the 1860s to the 1880s. He was a well known St Albans teacher, but in 1889 a warrant was issued for his arrest on a charge of stealing money from the School Board.

The attached paper reports on his life, and sets his downfall in the context of the School Board, the pressures on it, and its failure to audit its finances properly.

I’ve not yet found a photo of Mr Brash. This one is the right period and school, but probably does not show the headteacher, who would have been sitting in the middle of the front row.