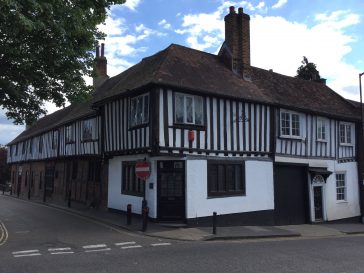 zoom
No. 37 Holywell Hill is a former inn.
Peter Bourton

In 2016 the Society received the two sets of papers that form this Special Collection from the families of the late John Smith and Gerard McSweeney respectively. The Collection relates to the history of the town’s many timber-framed buildings. It is an important resource especially for researchers investigating the urban development of market towns such as St Albans.

Both Smith and McSweeney were members of this Society, John elected an Honorary Member in 2012. Smith managed the extensive 17th century research project undertaken by SAHAAS members from the 1990s. This led to the publication of the acclaimed St Albans 1650-1700: A thoroughfare town and its people. McSweeney was a key member of the research group. Together they worked on a detailed investigation of surviving architectural evidence for the 17th century town. The combination of their work with the more typical documentary study of social history sources was an innovative feature of the project. With a career spent as an Inspector with the Royal Commission on the Historical Monuments of England, Smith brought his professional expertise to bear on this work.

This Special Architectural Collection contains the fruits of their research. Of particular note are over 50 reports drafted by Smith following visits to many of the remaining secular 17th century buildings. The papers otherwise largely consist of correspondence, images, maps and extracts from documentary sources that were used to develop their interpretation.

McSweeney’s papers also include documents and notes relating to his personal research into many properties in Chequer and St Peter’s streets.

Eventually we intend to add these papers to the Library’s online catalogue. In the meantime the following fairly rough and ready handlist should help researchers identify material of interest.

If you have any questions concerning the collection please email library@stalbanshistory.org.

Frederick Walter Kinneir Tarte lived and worked in St Albans for around twenty years from the mid-1880s. His skills as an architect were in demand in this fast-developing city and beyond with commissions to produce residential, commercial and school buildings for example. He also involved himself in the life of St Albans serving on the city council for a short time as well as taking leading roles in the activities of this Society and the 1907 pageant. That year he sold up and, for currently obscure reasons, emigrated to Australia.

This extensive collection of papers and digital copies represents research largely by John Brodrick, a past-president of the Society, into Kinneir Tarte’s contribution to St Albans and resulted in John’s essay about him for the Society’s publication, A History in all Men’s Lives.

This handlist and commissions list were collated by Diana Penton.