You are here: HomenextArchaeologynextSt Albans AbbeynextSeeing the saints in a new light: the St Albans Cathedral Wall Hangings Project 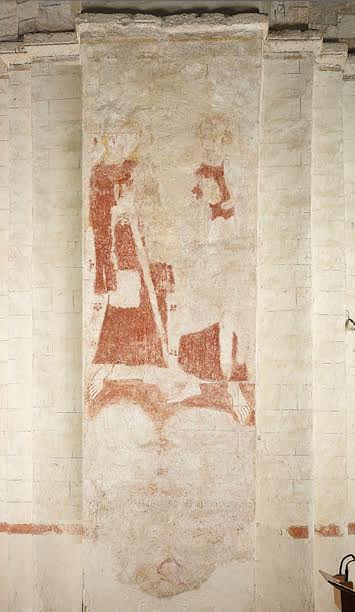 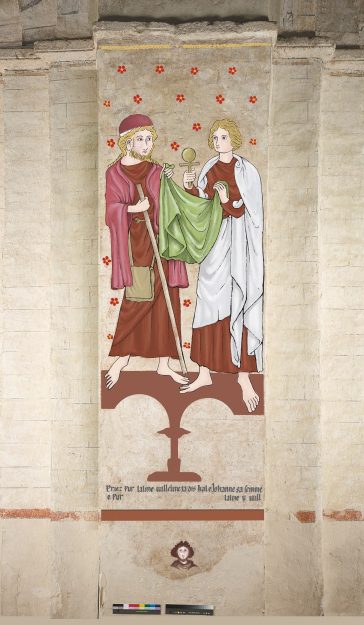 Just how many people have sat in the nave of the great Abbey Church through the years and wondered; what did the images look like when freshly painted? It is said that the medieval pilgrims fell to their knees in wonder on entering the abbey at the end of their journey. Would it be possible to have a look back in time to see just what might have been?

That was the seed that sparked a unique project, some of the fruits of which you can see in the images in this article.

The canvas for wall paintings provided by Norman pillars

On the north side of the nave are some of the Romanesque pillars that date from about 1080 when the Normans rebuilt the formerly Saxon Abbey of St Alban. These pillars provided a perfect canvas for wall paintings, as they are flat(ish) surfaces, plastered over rather than richly carved.

The aim of this project was to enhance and re-colour the paintings without damaging them, so that they can again play their original role within the modern cathedral. It was the four largest paintings, facing southwards, that were the obvious candidates for the project.

These monumental images are important for they are the only ones of their type to survive from medieval England. Both the casual visitor and the interested expert have often speculated on how they appeared in their glory days.

Defaced, and concealed by whitewash

They were defaced, whitewashed over and hidden from view sometime after the dissolution of the monastery by Henry VIII on 5 December 1539.

Under his son, Edward VI, in 1547 there was an unequivocal order, to be applied throughout the kingdom, to “Take away, utterly extinct and destroy all shrines … pictures, paintings … so that there remain no memory of the same in walls or window.”

Here in St Albans many of these wall paintings were only rediscovered under their whitewash in the mid-1800s by the Revd Henry Nicholson. Although damaged, sufficient detail remains to identify these as the saints Christopher, Thomas Becket, Sitha and a scene of an episode from the story of Alban and Amphibalus.

In 2015 the cathedral launched on a truly wonderful collaboration of history and technology, to create a digital projection, using photography, new artwork and new technology that would unravel the images. This would be achieved by new software which effectively ‘layers’ the film image.

The starting point was high-resolution photography commissioned from Angelo Hornak; further detailed photographs were also taken to better understand the areas where important features had survived.

In order to ensure accuracy, new measurements were taken and each layer of work was documented archaeologically. This starts with the latest activity on the surface and goes back in successive stages to rediscover the original paint surface. In order to create the digital image of each painting, a carefully staged process was followed to record and interpret the findings resulting in six layers within the film sequence. The final ‘layer’ of a fully coloured image also has further layers within the colours in order to create a clear, bright image that reflects the impression that the original may once have had.

The project has a lasting legacy: not only do we now have a highly detailed record of the images but, as time passes and the images fade, we will be able to show future generations the glory of St Albans. This may be a way forward for other wall paintings in danger of disappearing.

This unique achievement could not have happened without an amazing mix of academia and technology. The consulting art historian, Professor Michael Michael carried out incredibly detailed research. The images were created over an 18- month period by Craig Williams, a senior illustrator from the British Museum. In their turn the images went to the technical wizards at two companies, Fusion and Figment, who brought their 21st century technology, imagery and projection to the project, installing four commercial projectors high in the triforia. All the light levels have been carefully tested to ensure there is no damage to the images.

The combined work of artists, historians, photographers and technicians have allowed us to ‘lift the veil of time’ and see what has not been seen in centuries.

NB: The images are on view every day in the cathedral during the guided tours.