The Walklate Family and the Clock Tower 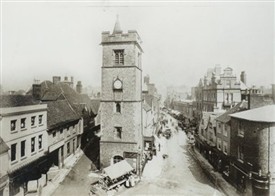 I was interested to read Chris Green’s article about the acquisition of the Clock Tower Photograph (dated c.1855).

I believe my grandfather x 2, James Richard Walklate and his wife were the proprietors of the saddlery shop beneath the Clock Tower between 1874 and 1898.

In a photograph taken after the building’s restoration in the early 1860s (see above), there is a trade sign to the right of the front window printed ‘J. WALKLATE. Saddles and Harness Maker.’ This is James who was born in St Albans in 1833 and lived in Spicer Street (somewhere near the former Vine public house). Judging from contemporary trade directories, it appears James was the tenant of the shop in the Clock Tower from around 1874. His father and grandfather had been harness makers in St Albans since the grandfather (John) came to St Albans about 1790. James died in 1889 and is buried in Romeland.

He appears to have carved his name into the stone battlement on the south side of the clock tower. This can still be plainly seen.

He was survived by his wife, Mary Walklate (nee Janes), who continued to run the business at the Clock Tower until 1898. Mary was born in St Michaels in 1834. They were married in the Abbey in 1856 and had seven children. One son, Edward, married into the Everett family who were coach makers on Holywell Hill.

I have a poor quality photocopy of a bankruptcy notice which was served on Mary Walklate (‘carrying on business at the Clock Tower as a Saddler’) (see below). It was dated 22 July 1898, issued by the Official Receiver and sent to a Mr C Gentle, probably for service (see left).

Mary Walklate died in 1903 and is buried in the same plot as James. The family is shown in the electoral register as living in Spicer Street and Romeland from 1856 to 1901. 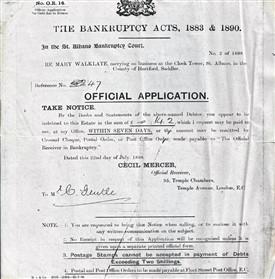 I would be interested to hear from anyone with an interest in the Walklate family in St Albans. [If you’d like to be put in touch with Jeff Walklate, please send a note to our Enquiries e-mail address]