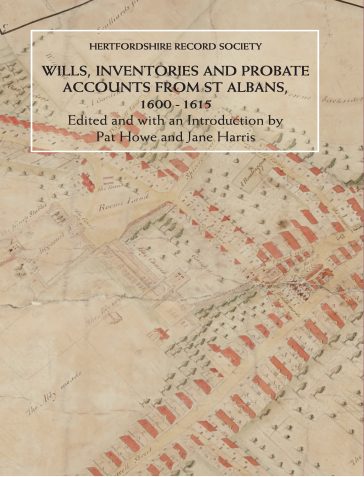 This collection of probate documents dating from 1600 to 1615 relates to inhabitants of St Albans. It includes 101 wills, 151 inventories and 20 probate accounts. These documents provide rich insights into the lives of the people, their occupations and trades, and the economy of the town.

By 1600, St Albans had come of age. Its great Benedictine monastery, which had dominated the town throughout the medieval period, had been dissolved in 1539. A Borough Charter granted to the town by Edward VI in 1553 established corporate government under an annually elected mayor aided by ten ‘principal burgesses’.  The town’s income would come in part from a twice weekly market and three annual fairs, but the local economy was largely dependent on agriculture. The people of St Albans also exploited its position on Watling Street by servicing the needs of travellers and traders on their way to and from London. Several large inns accommodated them and their horses and and these were supported by local tradesmen, in particular brewers and butchers.

All walks of life are represented in the probate documents, from labourers to prominent businessmen, the landed gentry and wealthy professionals from London who had their ‘country’ houses in the town. An astonishing range of occupations and trades includes not only butchers, bakers, fishmongers and grocers, but also shoemakers, mercers, carpenters (who were building houses), and blacksmiths (serving the horses).

The documents have been transcribed by members of the 17th Century Research group of SAHAAS. The group was formed in 1991 with the objective to create a database of St Albans inhabitants and to publish a book covering its social and economic aspects. In 2003 St Albans 1650-1700, a thoroughfare town and its people was published. This new book is an extension of that project.

Edited and with an Introduction by Pat Howe and Jane Harris

Available from:  Hertfordshire Record Society and HALS bookshop. You can also order direct from us: please email publications@stalbanshistory.org