You are here: HomenextBuildingsnextBuildings and structures of historic interestnextEstablishing the rifle range at Beech Bottom Dyke 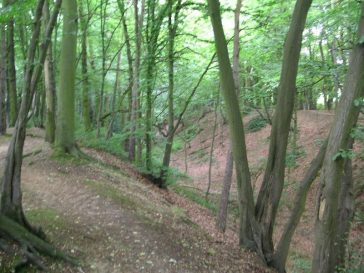 While Beech Bottom Dyke is a spectacular gift from the city’s past it lacks any record or evidence of its construction, probably early in the first century AD. (Conjecture as to its purpose is not the object of this article.) There was a brief opportunity to shine 1400 years later at the Second Battle of St Albans, in 1461, but the attacking Lancastrians very simply bypassed the barrier it presented by ‘coming in round the side way’.

A ready made firing range

The Dyke slumbered for another 500 years until the mid-19th century, when a perceived threat of invasion by the Old Enemy, France, led to local volunteer forces being raised around the country. St Albans was not to be left out and when a suitable practice range was required for the rifled weapons by then in use, the Dyke bottom presented itself as ready made. All that was necessary was a butts cross-bank at some point, which would stop the bullets and against which targets could be set up.

Amongst papers recently coming into the Society library was a digital copy, dated 1860, of a ‘back-of-an-envelope’ sketch of the first proposal for the rifle range (Fig. 1). Notes point out that just a few large trees would have to be felled and that a six-foot bank already existed at one point. This latter is evident in the 1726 Sandridge manor map, where a field boundary crosses the ditch and significantly there is an abrupt increase in the ditch width, on the south side. This could arise from the action of quarrying material for the bank, from one side of the boundary line. The plan notes state that material could be readily obtained nearby to raise the bank. In other words the pre-existing quarry pit would be enlarged to what it is now.

The 400-yard range initially proposed would have lain entirely below ground level, in the bottom of the Dyke. At some stage it was realised that it could be significantly extended to 600 yards if that firing point was to be at ground level, with a depressed line of fire down into the Dyke bottom. To permit this, an acute, oblique scollop had to be cut through the south flank of the ditch, and is still to be seen behind Nos 202 and 204 Beech Road. The 600-yard firing point is now covered by the Ancient Briton pub. (Beech Road was not constructed until the 1930s.)

A contemporary painting by local artist John Henry Buckingham shows a shooting competition in progress on the Dyke range. Late 19th century OS maps clearly identify the range, which continued in use for some 20 years, until improved rifles meant a longer range was needed and this was constructed north of Sandridge.

The use made of the Dyke in the 1800 years before the range is uncertain. Arable farming was clearly unfeasible, silviculture only marginally better, given the topography. The manor map describes the land parcels in the Dyke as woodland, so presumably the best was made of a difficult job.

All parts of the Dyke are accessible, but it should be noted that at a few points on the footpath (along the top of the south bank) some agility is required, especially when wet. There is not at present a continuous path through, along the bottom of the main section of the Dyke; it is blocked by the butts bank.